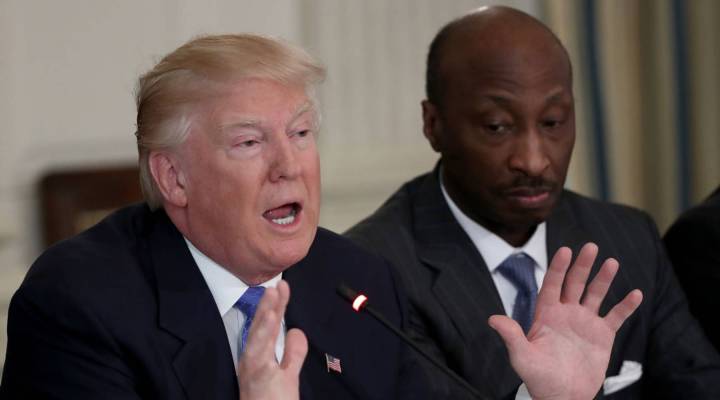 President Trump’s American Manufacturing Council originally included the chief executives of more than two dozen top U.S. companies, as well as leaders of industry groups and labor unions. Today, it has four fewer members, after Trump made what many called an inadequate response to the deadly weekend violence at a white supremacist rally in Charlottesville, Virginia.

Merck CEO Kenneth Frazier was the first to quit yesterday. Then the bosses of Under Armour and Intel, Kevin Plank and Brian Krzanich, followed suit. Today, Scott Paul, president of the Alliance for American Manufacturing, also left. (Tesla CEO Elon Musk quit earlier this year, after Trump announced he was withdrawing the U.S. from the Paris climate accord.)

For every CEO that drops out of the Manufacturing Council, I have many to take their place. Grandstanders should not have gone on. JOBS!

There are myriad reasons for CEOs to join presidential commissions in the first place.

“Presidential commissions are often ceremonial,” said Mark Cohen, director of retail studies at Columbia University. “It’s kind of like a merit badge for a CEO to be part of a group like this.” He said participation brings prestige and visibility to the CEO personally and to his or her company in the marketplace.

“A lot of money is thrown at lobbying in Washington,” Palizza said. “Being on a presidential council never guarantees that your policies are going to get carried out, but it probably guarantees that you’ll be heard before anybody else.”

Trump, though, has the loudest voice on the political landscape, said Norm Ornstein, resident scholar at the American Enterprise Institute and contributing editor at the National Review and The Atlantic. Ornstein said that many CEOs who initially agreed to join the president’s advisory council are now finding that the prestige and access they obtained is outweighed by being associated with an administration frequently accused of indifference to racism.

“Identifying with the president in this way was going to identify them with bad things that could damage their businesses and reputations,” Ornstein said. He predicted that more CEOs will quit the manufacturing council in coming weeks. “The CEO of Campbell’s Soup is now the target of a number of tweets using the hashtag #SoupNazi, coming from that famous “Seinfeld” episode,” he said. “If you’re the CEO of a company that has the kind of reputation that Campbell’s Soup has, you’ve got to think long and hard about whether you want to be the continued focal point for that kind of publicity.”

On the other hand, CEOs who choose to remain on the manufacturing council can continue to pursue policy goals (such as corporate tax cuts, immigration and health care reform) to benefit corporate America and their own particular industry. Analysts say those who don’t leave will also be well-positioned to develop better connections with the administration and Congress that can boost their companies’ bottom lines.

By contrast, CEOs who quit the manufacturing council for political reasons risk a barrage of angry tweets from Trump and may have less leverage to pursue their corporate goals in Washington down the road.