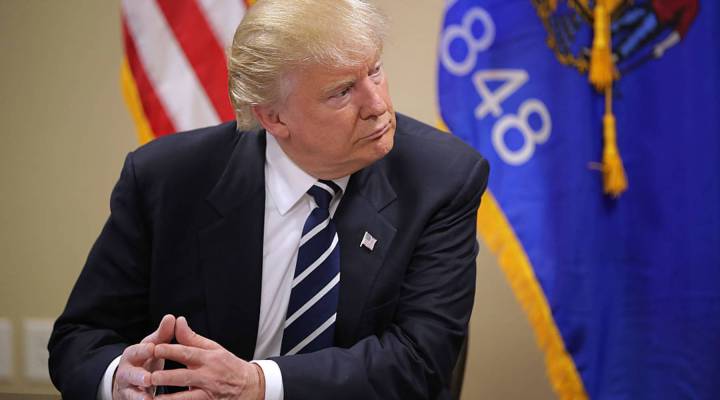 COPY
Republican presidential nominee Donald Trump sits down with a group of invited small business owners for a round table meeting at the Staybridge Suites on November 1, 2016 in Altoona, Wisconsin.  Chip Somodevilla/Getty Images

Republican presidential nominee Donald Trump sits down with a group of invited small business owners for a round table meeting at the Staybridge Suites on November 1, 2016 in Altoona, Wisconsin.  Chip Somodevilla/Getty Images
Listen Now

Why are American factories hurting? The rising U.S. dollar.

“That’s the primary reason that manufacturing has literally gone almost nowhere for the past two years,” said Michael Montgomery, an economist at IHS Markit.

The dollar got a boost after Donald Trump won the presidential election.  Montgomery said it started rising during the Greek debt crisis. Now traders are betting that Trump’s plans to increase infrastructure spending will give the economy a shot in the arm and give the dollar a boost. But why would that be bad for manufacturers?

“Things get more expensive because the dollar is stronger,” said Harold Sirkin, a partner of The Boston Consulting Group.

U.S. products are priced in dollars. So, a winemaker in France has to pony up more euros to buy an American-made tractor. U.S. manufacturers lose business.

“When your business is down you really can’t hire,” said Sirkin.

So, all of Trump’s promised manufacturing jobs will be harder to create. But wait! There’s more.

Lim said cheap imports make it hard for U.S. manufacturers to sell here, too. Remember that winemaker in France? The one buying a tractor? When he exports his wine to the U.S., he has an advantage because it’s priced in his cheaper euros.