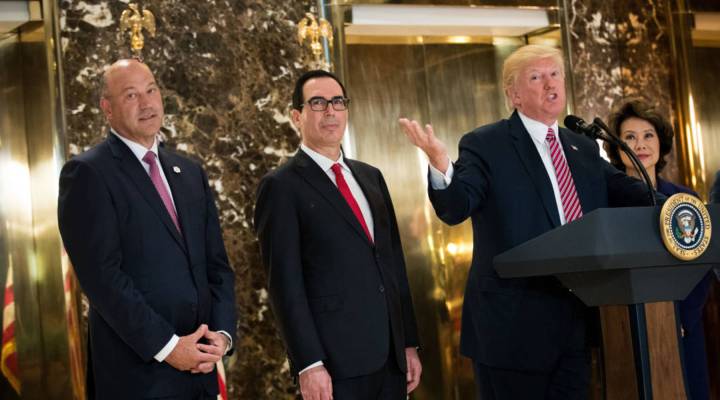 COPY
President Trump fields questions from reporters about his comments on the violence in Charlottesville, Virginia, yesterday at Trump Tower in New York City. With him, from left, are Director of the National Economic Council Gary Cohn, Treasury Secretary Steve Mnuchin and Transportation Secretary Elaine Chao. Drew Angerer/Getty Images

President Trump fields questions from reporters about his comments on the violence in Charlottesville, Virginia, yesterday at Trump Tower in New York City. With him, from left, are Director of the National Economic Council Gary Cohn, Treasury Secretary Steve Mnuchin and Transportation Secretary Elaine Chao. Drew Angerer/Getty Images
Listen Now

President Trump’s main council of top corporate executives fell apart today following Trump’s remarks that the violence at a rally of white supremacists in Charlottesville, Virgina, was perpetrated by many sides. A wave of resignations from the president’s American Manufacturing Council started Monday and continued this morning, until Trump abruptly disbanded it and another group with this tweet:

Rather than putting pressure on the businesspeople of the Manufacturing Council & Strategy & Policy Forum, I am ending both. Thank you all!

Marketplace host Kai Ryssdal spoke with Rachel Abrams from the New York Times about the CEO exodus. The following is an edited transcript of their conversation.

Kai Ryssdal: Is it going too far to say, at least for today anyway, that corporate America seems to be distancing or divorcing itself from President Trump?

Rachel Abrams: I don’t think that’s going too far. It certainly seems like some of the biggest CEOs in the president’s orbit are really recalibrating how closely associated they want to be with the president. Normally these advisory councils are really prestigious seats at the table for CEOs, and it has seemed more and more that these CEOs find this association to be increasingly a liability given all of the backlash against how the president has handled certain recent events, including and of course mostly his response to the events in Charlottesville this past weekend.

Ryssdal: You have to look at this, well [through] many lenses, but one that lends itself right away is the idea that President Trump was the businessman president, he was the CEO president who now can’t get CEOs to sit down in the same room with him.

Abrams: Right. And I think that the business community has really viewed him as being business friendly. I don’t know whether he’s been truly accepted by the Wall Street community, for example. We’ve written a lot about how Wall Street, especially after some of his company’s bankruptcy and financial troubles, banks were very hesitant to lend to him. But in terms of whether the business community embraced him as a president, I think we can certainly say that they were very optimistic that he would enact policies that would be very business friendly. Corporations are looking to him for tax reform purposes, specifically they’re really interested in corporate tax reform, lowering the corporate tax rate. But I think that as we’ve seen Republicans really stumble to get legislation passed, I think that the optimism that there are going to be big legislative wins that will benefit the business community, I think that optimism is waning, and I think that at the same time there’s this growing risk of being associated with the president. And the idea is that these CEOs will get a seat at the table, they’ll get access to the president, and the ability to help shape an agenda is worth whatever backlash the CEOs might get.

Ryssdal: Just because this is the way things seem to go with this president, that something happens and he turns around and pretends it almost didn’t, and then six months later, you know, he turns it somehow to his advantage — it’s possible that by, like, Christmas, they could be buddies again.

Abrams: I mean, anything’s possible. It’s impossible to predict the future. I just feel like all these CEOs are just trying to figure out: Is this ultimately more beneficial than it is harmful? And I think for them to feel like association with the president is more beneficial, they’re going to have to get something in return for that association. And I don’t know if they’ve really seen that yet.