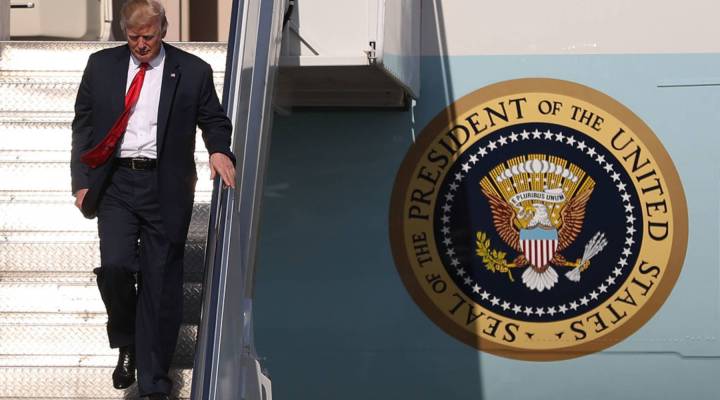 COPY
President Donald Trump walks down the stairs after arriving on Air Force One at the Palm Beach International Airport to spend part of the weekend at Mar-a-Lago resort on February 17, 2017 in West Palm Beach, Florida. Joe Raedle/Getty Images

President Donald Trump walks down the stairs after arriving on Air Force One at the Palm Beach International Airport to spend part of the weekend at Mar-a-Lago resort on February 17, 2017 in West Palm Beach, Florida. Joe Raedle/Getty Images
Listen Now

President Trump declined to fully dissociate himself from his businesses when he took office. Although he gave operational control of the Trump Organization to his sons, the president said he wasn’t going to sell his interest, or put his assets into a blind trust. Federal conflict-of-interest laws exempt the chief executive. However, market forces have other ideas.

Since the events in Charlottesville, Virginia, and the president’s comments thereafter, 15 charities have decided they’re not interested in holding their events at his Mar-a-Lago Club in Florida. Those 15 are out of about 21 charities that were said to have been thinking about having events there before Charlottesville.

Marketplace host Kai Ryssdal talked to David Fahrenthold, a reporter covering politics for the Washington Post, about the impact this may have on the president’s businesses. The following is an edited transcript of their conversation.

Kai Ryssdal: The president is, of course, a businessman. How much is this going to cost him?

David Fahrenthold: It’s hard to tell, because not all these charities say how much they pay Trump to host these events there. But if you look back at charity filings you can kind of get a sense and it’s a significant amount of money. He’s lost 11 galas, or dinnertime events, and those the charities can pay him between $100,000 up to $275,000 just for one night. So, add those together it’s at least a million dollars of potential revenue that he’s losing. In addition to that there is four luncheons so far, and each one of those can be between $25,000 and $50,000.

Ryssdal: What kind of groups are we talking about here? This is, just to remind people, sort of the highlight of the Palm Beach social season right, these kinds of events?

Fahrenthold: Right. Palm Beach is an unusual place I’ve learned a lot about it now covering this beat for a few months. All these, sort of, wealthy folks move down to Palm Beach for the season, they call it. And every weekend there’s some big, lavish, over-the-top charity ball – that’s sort of what you do in Palm Beach. And so, Trump lost charities like: the American Red Cross, the American Cancer Society, the Salvation Army, Susan G. Komen, that put on these large, lavish banquets there. And many of them had been customers of Mar-a-Lago for a number of years going back to 2008, or even before.

Ryssdal: What do we know about the president’s other hospitality business? You’ve written about his golf course out here in L.A. and I’m also thinking about his hotel, obviously, in Washington, D.C.

Fahrenthold: It’s really a bifurcated answer. On the one hand the Washington, D.C., hotel, which is here in what President Trump calls “the swamp,” has made a lot of money catering to the swamp. There’s a lot of foreign governments, conservative groups, state governors, that want the presidency or that have paid for blocks of rooms that hotel. But, if you look at the broader universe of Trump’s properties, he has a lot of places that cater to the very, sort of, elite, especially the coastal elite that Trump the president, spends all his time bashing. So, there’s places like, you mentioned the golf course in L.A, it’s lost a lot of money from charity outings. And then if you look at Trump’s SoHo Hotel in New York City, that’s a place that used to depend a lot on corporations, big New York businesses, that would rent out the ballrooms to have meetings and other stuff like that. There’s been a lot of reports by WNYC, the radio station in New York, that they’ve lost a ton of that business and have even had to consider layoffs. And they’ve canceled the turned down service, as a result of that. So, if you lose the turn down service, it’s all downhill.

Fahrenthold: It’s been a very interesting turning point. We saw President Trump in the context of the campaign make a lot of statements, both live, you know his comments about Mexican immigrants at his announcement speech, and also on tape in the Access Hollywood tape. There were lots of things that happened in the campaign where you thought, wow people are going to break with him. And winning, I think cleared the slate and it’s been interesting to me to see that Charlottesville, that his comments about there being “very fine people” among the folks marching to preserve the Robert Lee statue, those comments seem to have really driven a wedge between Trump and the businesses that patronize his businesses, and also the businesses whose political support he needs. I think what’s flipped is that before Charlottesville, if you were connected to Trump through an advisory board, or through a gala at Mar-a-Lago, pulling that connection would seem like a political decision. Now, in some cases, it seems like people are treating the decision to stay connected to Trump – through an advisory board or through a gala, through some business connection – the decision to stay with Trump after Charlottesville, that looks like a political decision. And I think that’s changed a lot of calculus for people, and it’s really affected the business of the Trump organization. 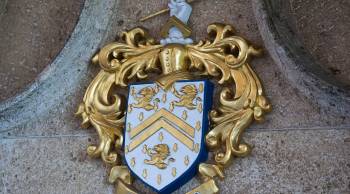