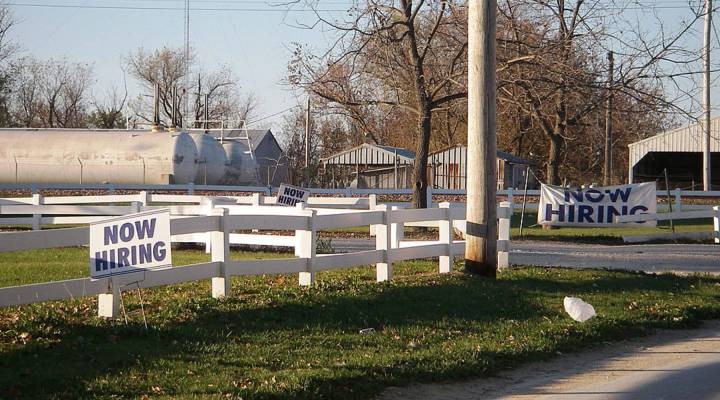 President Donald Trump came to office with a pledge to ratchet up immigration enforcement. So far, it’s still unclear if his administration plans to make workplace immigration raids part of its strategy.

Such raids were a hallmark of President George W. Bush’s second term. Tiny Postville, Iowa, population 2,000, was home to one of largest in history.

On May 12, 2008, kids at school in Postville heard helicopters circling overhead. Pedro Lopez Vega, a seventh grader at the time, gathered with friends at the window out school and mused about what was going on.

“We thought maybe they’re the National Guard trying to show off to the high schoolers, trying to recruit a couple of them, like they’re giving them helicopter rides,” he said.

Most of Lopez’s family members, immigrants from Mexico, were undocumented. So the helicopters also triggered something else: a fear of being deported.

“There’s also that kind of voice in the back of your head, [saying] ‘What if the biggest fear of your life — the thing that can essentially destroy your life–is happening?’”

Word came that there was an immigration raid at the kosher meatpacking plant, Agriprocessors, where both of Lopez’s parents worked. His dad wasn’t on that shift, but he knew his mom was.

His mom was one of nearly 400 workers arrested in the raid. She told authorities she was in the country alone so that Lopez, his dad and two sisters wouldn’t be discovered. Over the following year, she was shipped to multiple detention centers in several states, then eventually deported back to Mexico.

For Lopez, the separation was brutal emotionally. And without his mom’s income, the family sometimes couldn’t pay its water bills or buy food without help from the local food pantry.

Several Agriprocessors managers wound up in prison for labor and immigration violations or financial crimes. The company went into bankruptcy, and the plant shuttered about five months after the raid. The whole town was thrown into crisis.

Goldsmith, a 20-year resident of Postville, is part of the Hasidic Jewish community that sprang up in the town around the kosher meat plant.

He said because of the raid, hundreds of undocumented workers disappeared practically overnight, no longer paying rent, no longer spending money around town. This all happened as the Great Recession was unfolding, creating a double whammy.

Aaron Goldsmith, a business owner in Postville, at a warehouse for his business, Transfer Master, which makes customizable hospital beds. He said the town took years to recover from the 2008 immigration raid.

“We had so many houses foreclosed on. People abandoned their houses. Businesses picked up and moved away,” he said.

Pointing to an empty storefront on the main drag in town, Goldsmith said the retail space used to be a Hispanic-owned grocery store and restaurant.

“That building is still empty. It was 100 percent the raid drove that out,” he said. Goldsmith had a hard time financing an expansion of his own medical supply company because property values dropped so sharply.

New owners bought the kosher plant nearly a year after the raid. It got a new name: Agristar. The new management started to tap a new source of workers with legal status: Somali refugees. Goldsmith, ever the town booster, said the town has mostly recovered. A couple of once-empty storefronts are now Somali-owned businesses. One of them is next to a synagogue.

“That’s the ultimate diversity,” he said, proudly. “Consider the Middle East, how broken it is, and here you have a Muslim Somali business right next to an Orthodox Jewish synagogue.”

But the long-term prospects for Postville, like most rural towns its size, are not great. The population is aging; the workforce is shrinking. Those demographics mean some business owners still turn to undocumented workers nine years after the raid.

But Pedro Lopez Vega’s family no longer counts among those workers.

Pedro Lopez Vega stands with members of his extended family at his graduation from Luther College in Decorah, Iowa, near his hometown of Postville. His mom, who was deported in the wake of a raid at Agriprocessors, is under the bell. His father is next to him in the baseball cap.

Lopez said about a year after the raid, his whole family got visas, including his mom, allowing her to return to Postville. Next came green cards.

“We all have permanent residency,” he said.

Lopez recently finished college and moved to the Minneapolis suburbs. His family remains in Postville, and his parents both work at Agristar, the kosher meat plant. The owners are different, but it is, of course, the same place where his mom got arrested. Lopez isn’t shocked she went back.

Click the player below to hear more reporting from Postville.