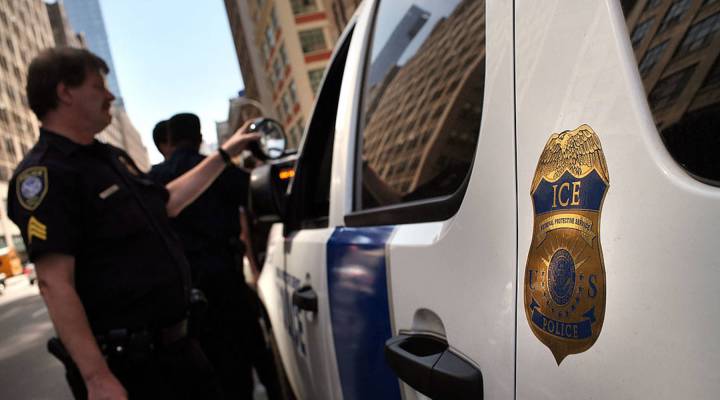 On Jan. 10, in a big show of force, Immigration and Customs Enforcement agents swept through dozens of 7-Eleven stores across the country, arresting 21 workers and serving audit notices to managers.

One of the 98 stores that was targeted is in Koreatown, a heavily Latino and Asian neighborhood in Los Angeles, crowded with shops, karaoke bars and all-you-can-eat Korean barbeque.

Just days after the enforcement operation, Jose Eduardo Sanchez, armed with a tote bag of glossy brochures, visited many of those businesses looking to speak with managers.

“We’re trying to talk to Korean business owners, Latino business owners in terms of what to do if they’re confronted with ICE at work,” said Sanchez, an organizer with the nonprofit KIWA. Along with his colleague Doo Kang, Sanchez explained to employers that no matter whom they employ, they should understand their rights in case ICE agents show up. “The most important rule — and if I could say this a thousand times in one conversation, I will — is that you have the right the right to remain silent,” he said.

Sanchez also advised employers to have a plan, whether that’s identifying a point person or a possible exit strategy, and to go over it with employees, like a fire drill.

Among the businesses Sanchez and Kang visited was El Pollo Loco, a local fast-food restaurant.

“It’s another chain, it’s another restaurant that’s very common in immigrant communities, so could that be a potential target?” Sanchez asked.

Even business owners who are a lot less visible were rattled by the 7-Eleven sweep. Melanie, who didn’t want to disclose her last name for fear of being targeted, runs a housekeeping business in Southern California.

She said she employs roughly 14 workers who spend their days cleaning homes, a set up that gives her some comfort.

“It’d really have to be a house-to-house sort of investigation to try to find anybody that works with us right now,” she said. Still, she said, “places, communities that we thought were safe for all immigrants, and basically all people, really aren’t.”

And the recent 7-Eleven enforcement operation, which was the largest one against a single employer since President Donald Trump assumed office, is just the beginning.

“The enforcement operation that happened on Jan. 10 will not be the last one that you hear about in 2018,” said Matthew Allen, assistant director for investigative programs at ICE Homeland Security Investigations. Future enforcement operations won’t be focused on specific industries or only large employers — “we’ll go where our information and evidence takes us,” he said.

Making it clear that the workplace is not free from immigration enforcement is a main goal of the operations, he said.

“Part of our job is to create that deterrent effect,” Allen said. “But I want to make it clear that we’re trying to impact not only employers, but employees and people who are thinking of coming to the United States.”

When ICE agents show up at a business, they don’t always make arrests. They may just serve audit notices, requiring documentation. And if employers are found to have hired unauthorized immigrants, they can face steep fines.

But Michael Wishnie, a professor at Yale Law School, said it can be hard — and at times impossible — to prove that employers knew someone’s papers were fake, and fines can usually be whittled down.

“I think most employers experience these as a sort of slap on the wrist, a kind of occasional annoyance, but rarely anything meaningful,” Wishnie said. He said the last time large-scale workplace raids made headlines was under President George W. Bush. Agents rounded up hundreds of workers at meatpacking plants, factories and farms.

But business leaders pressured politicians to dial it back, something that could easily happen again, Wishnie said.

“Eventually the pushback tends to lead the administration to fall back, so there these sort of ebbs and flows,” he said.

Even so, immigrant advocates argue that undocumented workers are already afraid to speak up.

“And to any worker who’s just seen ICE raid a bunch of businesses, they’re going to be a lot more worried about actually reporting wage theft,” said Casey Raymond, a lawyer with the nonprofit Bet Tzedek.

Raymond helps unauthorized workers file claims when they deal with workplace violations, like not being paid minimum wage or given required breaks. He said he’s seen a rise in cases of workers who confront their bosses only to be threatened flat out with being reported to ICE. Other times, the threats are more subtle, with employers asking questions like “’Oh, so where are you from again?’ or they’ll start asking a lot of questions about country of origin.”