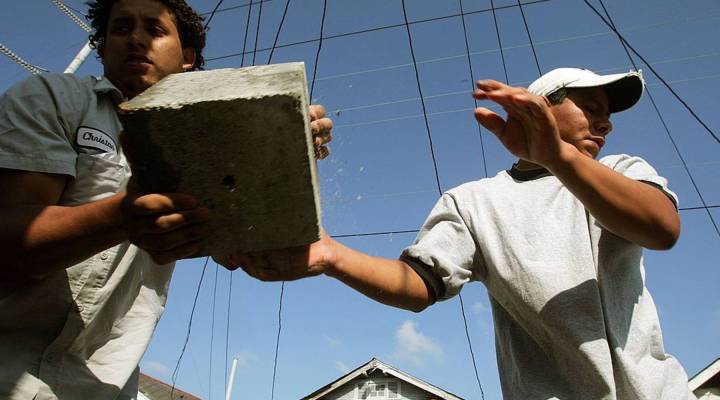 Advocates of stronger immigration enforcement say President Trump needs to take employers to task, since it’s business owners who hire undocumented workers — knowingly or unknowingly. And one way to do so would be to change the current process by which employers ascertain work authorization.

When employers make new hires, the workers have to prove their identity and eligibility to work. They present documents, often a driver’s license and Social Security card. And they fill out a form called an I-9, on which they document the papers presented.

“The problem with this mechanism is that they could be fake, both with respect to the person’s identity and respect to their authorization to work,” said Muzaffar Chishti with the nonpartisan Migration Policy Institute.

Unless the government audits or raids their business, the employers may never know if forms are fraudulent. Some critics say employers also have plausible deniability if the documents are false, as they may simply claim they are not “documents experts.”

Many advocates of stronger enforcement of immigration laws want to see a program called E-Verify mandated nationally. It’s an online system that helps employers vet the documents that new hires submit and check if they’re cleared to work in the U.S.

Chishti said a small fraction of employers use E-Verify. It’s only required in some states and for certain federal contractors. But Chishti said E-Verify is adding about 5,000 new users each month.

Chishti said efforts to mandate E-Verify nationally have been fought hard in the past by some employers “who find that any intrusive documentation for work authorization violates employers’ rights to hire people and makes it hard for them to quickly hire people that they want.”

With E-Verify, a new hire’s information gets checked against Homeland Security and Social Security databases. If there’s a problem, E-Verify flags it.

President Trump hasn’t yet clarified how he might clamp down on employers who make illegal hires. But candidate Trump lauded the E-Verify system, which he said he has used many times.

“I have the E-Verify system. I didn’t hire one illegal immigrant to build Trump International Hotel on Pennsylvania Avenue,” he said on the campaign trail in North Carolina last October.

One employer who’s not using E-Verify is the owner of a Twin Cities construction business. She’s named Monica. We agreed not to use her last name because she and her husband rely on undocumented workers. Monica said it’s hard to find workers who aren’t immigrants.

“It’s literally working Monday through Saturday from 7 a.m. until the job is done, which could be 5 p.m. or 10 p.m.,” she said. “A lot of people don’t want to work those hours.”

Monica said she avoids the need for work authorization by using subcontractors.

The subcontractor “out” doesn’t always provide full legal cover, according to Julie Pace, an employment lawyer in Arizona.

Nevertheless, she’s seen a lot more employers try it, or other off-the-books pay arrangements, ever since Arizona mandated E-Verify in 2008.

Pace said many undocumented workers have left Arizona. E-Verify’s made it harder for them to get a job. But for those who stayed, she said, “you had many people getting independent contractor status. They were day laborers, they were self-employed, going for cash or checks on an ad hoc basis.”

She thinks that would happen on a larger scale if E-Verify becomes required for everyone.

Chishti with the Migration Policy Institute said E-Verify could nevertheless succeed if more immigrants are authorized to work.

“Because only when they have right to work will they have incentive to comply with the E-Verify program,” he said.

Otherwise, he said, there are too many reasons for employers and those they hire to find workarounds.