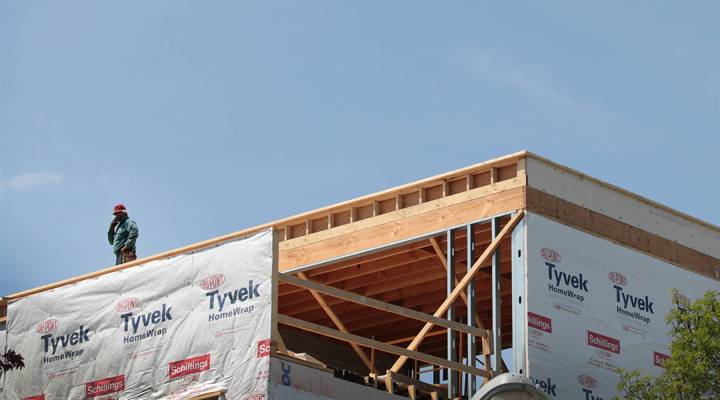 COPY
Attorney Steven Dwyer said more undocumented workers are seeking his help with cases related to workers' compensation for on-the-job injuries, including one worker who is $17,000 in debt from medical bills incurred after he fell off a roof. Scott Olson/Getty Images

Attorney Steven Dwyer said more undocumented workers are seeking his help with cases related to workers' compensation for on-the-job injuries, including one worker who is $17,000 in debt from medical bills incurred after he fell off a roof. Scott Olson/Getty Images
Listen Now

A couple of summers back, a 25-year-old immigrant from Mexico was mowing a lawn for a landscaping company in Jackson, Wyoming. “I had an accident,” the worker said (Marketplace is withholding the worker’s name because of his fear of deportation). “A co-worker drove over my foot with a machine.”

In an interview with the Jackson Hole News and Guide, a collaborator on this story, the undocumented worker said he was immediately worried after the accident. “I went to talk to the employer. He just told me, ‘oh, well, for you, it wouldn’t be in your best interest to do anything, if you put in for workers’ comp, or something like that.’”

The employee said he did submit a workers’ compensation claim, but it was denied. Under Wyoming law, undocumented workers cannot be considered employees. It’s the only state that explicitly excludes them by law. Wyoming has the highest rate of workplace deaths and injuries, and many of those workers are Latino, the group that nationally suffers more workplace accidents than any other. Wyoming’s Department of Workforce Services, which oversees worker’s compensation, declined to comment on any individual cases, citing state confidentiality laws.

But the worker still needed to figure out how to pay his medical bills, which were $2,000 and are still climbing. Under law, if he wasn’t eligible for worker’s comp, he could still sue his employer. “I went to two lawyers here in Jackson and they told me that I couldn’t demand money from the company; that, if I did, the company would call immigration.” he said.

There Steven Dwyer is one attorney in Jackson who takes cases like this. Dwyer said more undocumented workers are seeking his help than ever. He is currently working for an undocumented worker, also from Mexico, who fell off a roof. The worker’s employer had been paying into worker’s comp for him, but the roofer, who never saw those benefits, is now about $17,000 in debt.

“When he was hurt, his boss said he would pay the medical bills, and then the medical bills got more than what the boss wanted to pay, so the boss cut off all contact with the person,” said Dwyer. He said this worker, too, was denied workers’ comp because of state law regarding undocumented workers.

Back in 2005, lawmakers tried to fix that confusion by leaving it up to employers to decide if their workers are here legally. Now, if the employer believes a worker’s paperwork seems legitimate, that worker can receive worker’s comp. More than 11,000 immigrants work in Wyoming, many of them in hazardous industries like construction, transportation and mining. Employers we interviewed for this story did not want to go on the record to talk about how the law has affected their employment practices.

Jason Wolfe, interim deputy director at Wyoming’s Department of Workforce Services said that, in his experience, the existing law works pretty well. “I think we are, in a sense, including the undocumented workers, as long as they’re providing some verification to the hiring employer that they have an authorization to work,” he said.

Debbie Berkowitz, worker health and safety program director with the National Employment Law Project, said the Wyoming system could be exploited by companies. “It actually encourages unscrupulous employers to hire undocumented workers and then use their immigration status as a shield to escape full responsibility for on the job injuries,” Berkowitz said.

Berkowitz said several other states have also considered withdrawing worker’s comp for undocumented workers too. But so far, no others have.