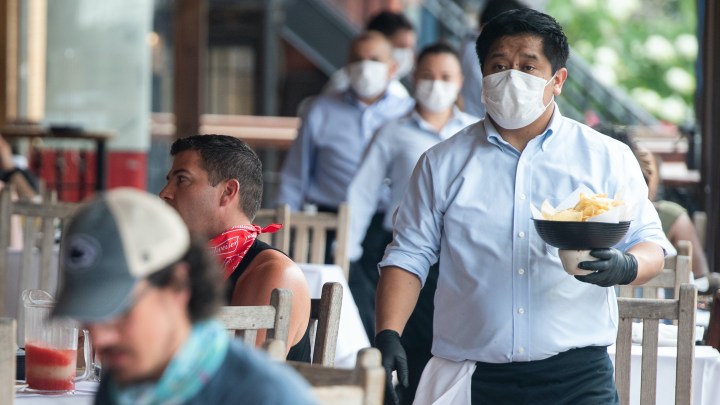 COPY
Many jobs often done by undocumented immigrants, such as construction and food service, were cut back during the pandemic. Saul Loeb/AFP via Getty Images

Many jobs often done by undocumented immigrants, such as construction and food service, were cut back during the pandemic. Saul Loeb/AFP via Getty Images
Listen Now

Early on in the pandemic, you might have heard the narrative that COVID-19 was “the great equalizer,” a virus that affected everyone alike. Over a year later, it’s clear that’s not the case. David Dyssegaard Kallick, with the Fiscal Policy Institute, said, “Undocumented immigrants, they’re very much in the categories of either people who have lost their jobs or people who are essential workers and putting themselves at risk.”

Jobs that were often done by undocumented immigrants, like construction and food service, were shut down. And many of those workers were not eligible for unemployment benefits or relief payments.

Last week, New York decided to offer one-time payments of up to $15,600 to undocumented immigrants who lost work during the pandemic. The Excluded Workers Fund — a $2.1 billion fund in the state budget — is the biggest of its kind in the country, providing as much as the equivalent of $300 per week for the last year.

State Sen. Jessica Ramos, a proponent of the fund, said: “We need this group of neighbors to be able to catch up on their rent. We need them to be able to spend money in small businesses.”

Undocumented immigrants spend money like everyone else, according to Claudia Flores of the Center for American Progress. She said the whole point of the government stimulus is to get people injecting cash into the economy. “And when you leave the undocumented immigrants out of that, that means that families are making tougher decisions between where they spend.”

But the new fund has plenty of detractors.

Several Republican lawmakers on the House Committee on Oversight and Reform are pressing the White House to review the fund’s legality and “protect the integrity of American taxpayer dollars.”