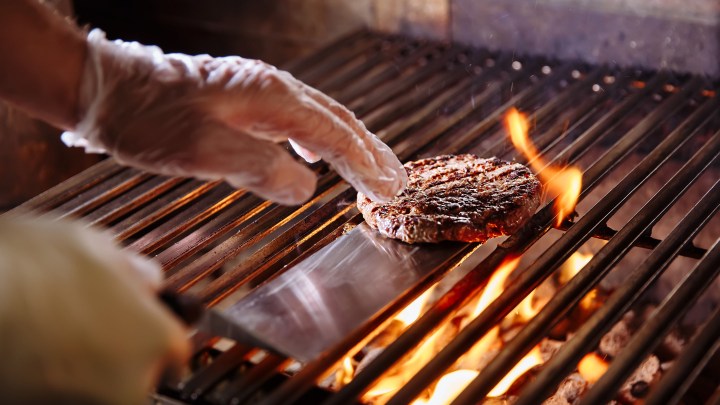 COPY
Perhaps no group is more in need than restaurant workers. Many of them are undocumented, and were left out of CARES Act relief. Volha Shakhava via Getty Images
COVID-19

Perhaps no group is more in need than restaurant workers. Many of them are undocumented, and were left out of CARES Act relief. Volha Shakhava via Getty Images
Listen Now

As a kid growing up in West Los Angeles, Tony Ruiz often walked by the San Francisco Saloon on Pico Boulevard and wondered what it would be like to work there. Two decades later he found out, when he became a line cook making $14.50 an hour.

“I used to handle most dinners from Wednesday to Monday night,” he said. “I cooked burgers, sandwiches, wings, typical bar food. It was a fun place overall.”

Ruiz had been working there for nine months when the pandemic hit and the restaurant shut down, “and it was just like it was overnight, my bread and butter was taken from me. Restaurants was all I knew,” he said.

As the Biden administration takes the reins of the economy, out-of-work families are hoping for a new round of federal pandemic relief. And perhaps no group is more in need than restaurant workers. Many of them are undocumented, and were left out of CARES Act relief. A Pew Research report says undocumented workers accounted for nearly a tenth of all workers in the food industry in 2017.

Ruiz said his parents brought him from Oaxaca, Mexico, to the U.S. when he was a year and a half old. He said he qualified for Deferred Action for Childhood Arrivals, a policy that shields young, undocumented residents from deportation, but Ruiz aid he didn’t see any reason to apply. He was working steadily in restaurants.

“I was trying to achieve a career. I figured I wouldn’t need it. I figured restaurants would always be around,” he said.

Unable to pay rent, Ruiz said he now stays with sister and visits food banks. He said he also receives help from a local nonprofit called No Us Without You.

Damián Diaz is one of the co-founders of the organization. He also runs a restaurant consulting firm.

“At the beginning of the pandemic, we started to help to feed undocumented back-of-house workers in the hospitality sector,” Diaz said.

Diaz and his business partner had connections to food suppliers and lots of out of work friends who volunteered to help distribute food. Now he said the group feeds 1,400 families.

“If they really are essential, let’s treat them as such,” Diaz said. “Let’s figure out some type of common ground here.”

California has provided some financial relief to those workers, but labor advocates say it has fallen short. As for Ruiz, he has not given up on his dream of opening his own restaurant. He’s saving up for equipment to sell tacos on the street until he can get back into the kitchen.