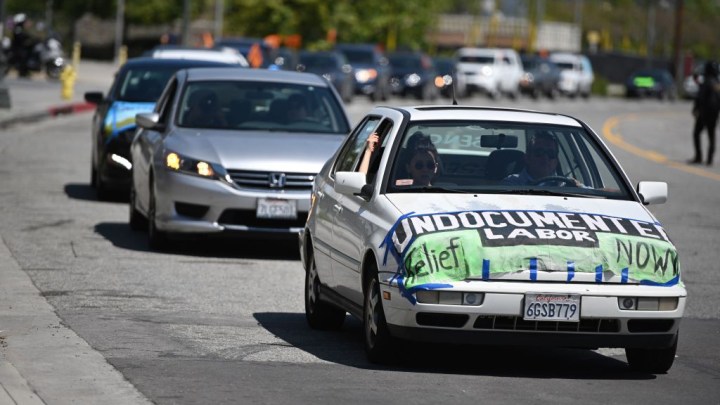 COPY
Even though undocumented workers pay taxes, they're not eligible for federal public benefits. Robyn Beck/AFP via Getty Images
COVID-19

Even though undocumented workers pay taxes, they're not eligible for federal public benefits. Robyn Beck/AFP via Getty Images
Listen Now

Immigrants living in the U.S. without legal permission are particularly vulnerable in the COVID-19 pandemic crisis. Federal relief efforts are not reaching this population.

Ingrid Vaca isn’t a U.S. citizen and doesn’t have a green card. She lives in Virginia, and before COVID-19 hit, she was earning about $1,500 a month cleaning houses in the Washington, D.C., area. But the work has dried up and now she’s having to negotiate rent deferrals with her landlord.

“My living situation is pretty critical right now,” Vaca said in Spanish. “I’m receiving help from my friends and one nonprofit organization that is specifically worried about workers.”

Vaca’s getting $400 a month from the National Domestic Workers Alliance, but says that’s nowhere near what she needs to pay the bills. She’s getting nothing from the government. Vaca lives with her adult son, who is also out of work and doesn’t have legal status.

She doesn’t have a social security number. She only has an individual taxpayer identification number. So even though she paid taxes when she was working, she’s not eligible for any federal public benefits.

“At the federal level what we are pushing is that the ITIN, or the individual taxpayer identification number, and the individuals who pay taxes be included in the stimulus,” said Angelica Salas, executive director of the Coalition for Humane Immigrant Rights.

That’s happening, to some extent, in California. The state will start taking applications in May for a one-time cash benefit of $500 per adult undocumented person, capped at $1,000 per household.

“It is a very humane thing that they’re doing in California,” said Elaine Kamarck, senior fellow at the Brookings Institution. She says it makes economic sense to help the most vulnerable to prevent them from sliding deeper into poverty.

There’s no federal help, “so they’re going to have to rely on either states like California acting independently or on the philanthropic community,” Kamarck said.

The $125 million allocated in California is enough for about 150,000 people there. That state’s undocumented population is about 2.2 million.