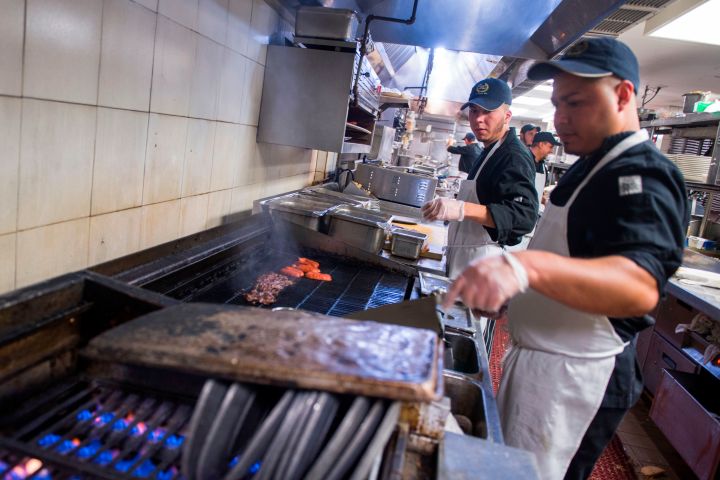 Nearly a month after much of the country started shutting down, and more than two weeks after the CARES Act passed, Americans are starting to receive cash assistance – $1,200 stimulus payments and expanded unemployment checks.

But there are millions of undocumented immigrants and some legal immigrants who won’t receive any help at all, either because they’re afraid to apply for unemployment benefits, or because they don’t qualify.

Aura Cruz and her husband don’t qualify, even though they both lost their jobs – hers at Applebee’s, his in construction – within a week of each other. They have an 8-year-old daughter living with them in Queens, two teenagers back home in Guatemala, and very little savings.

Marco Saavedra and his parents don’t qualify either, not for unemployment and not for a small business disaster loan, even though they had to close their family-run Oaxacan restaurant in the South Bronx. They’re living off savings that are supposed to be their retirement.

And Ana, who doesn’t want to share her last name because she is undocumented, doesn’t qualify. Even though she hasn’t had a paycheck in a month, since she was laid off from her job at a restaurant in Manhattan. She doesn’t know what she’s going to do.

“You have a large pool of people, a large segment of the population that isn’t getting any of this federal money, and has to tap into other spaces like nonprofits and grassroots organizations that have very little in comparison to the federal government,” said Audrey Pan, a community organizer with RAISE, a project that grew out of the Asian American Legal Defense and Education Fund.

Undocumented immigrants, in particular, “are falling through the cracks,” said Annelies Goger, a Rubenstein fellow at the Brookings Institution who studies workforce policy and safety nets. “Which is particularly concerning because restaurants have been highly impacted.”

About 10% of restaurant workers nationwide are undocumented. In major cities, like New York and Los Angeles, that number is much higher – closer to 40%, according to One Fair Wage, a nonprofit that advocates for higher wages for service workers. Many more undocumented immigrants work in other service jobs and in industries like construction and childcare that have also been disproportionately impacted by coronavirus-related closures.

That is why advocacy organizations like Make the Road are pushing for what they call a “just stimulus,” one that would ensure “anybody with an ITIN number, or Individual Taxpayer Identification Number, would be eligible to receive unemployment,” said Angeles Solis, workplace justice lead organizer at Make the Road New York. “For many immigrants in this country, documented or not, they still pay billions in taxes every year. So the hope is that Congress passes a package that would enable those with ITINs to access unemployment.”

A number of House Democrats are pushing legislation that would do just that, but it’s unlikely to get traction in the Republican-controlled Senate. States could offer assistance to undocumented immigrants on their own, something California Governor Gavin Newsom has said he’s considering.

“States could definitely try to try to step in, but how much funding they have to actually do something is going to be a pretty big open question,” said Daniel Costa, director of immigration law and policy research at the Economic Policy Institute. “And states that have either Republican majorities or strong Republican oppositions probably aren’t going to let too much pass that would actually go to the workers that need it most.”

For now, the only help available to those who don’t qualify for unemployment is coming from grassroots emergency funds which have started popping up all over the country. Some have been started by nonprofits, others by individuals, a few by cities.

The One Fair Wage Emergency Fund, which is open to restaurant workers, delivery drivers and other tipped workers regardless of immigration status, was quickly “overwhelmed with need,” said Saru Jayaraman, president of One Fair Wage.

Within the first week, 100,000 people applied, often three or four a minute. The stories are heartbreaking.

Many of those seeking help from the fund are fast-food workers who were making the federal minimum tipped wage of $2.13 an hour plus tips. Barely enough to survive on, even before.

“These workers live, I call it, tip to mouth,” Jayaraman said. “Doomsday hit for about 4 million of them on Friday [March] 13th when so many were laid off. So they had tips that day, perhaps they used those tips to feed their family on Saturday, maybe Sunday. Come Monday the 16th they had absolutely nothing.”

Many don’t qualify for unemployment, but Jayaraman is also hearing from legal immigrants who do qualify but are choosing not to apply because they’re afraid it could one day jeopardize their application for a green card or citizenship under the Trump administration’s public charge rule.

“I have talked to a very large number of documented immigrants who are in process, who say they would never apply for unemployment insurance,” she said. “Because in this environment, under this administration, it would jeopardize their ability to get permanent residency or citizenship.”

The Department of Homeland Security said it will “not consider federal and state retirement, Social Security Retirement benefits, Social Security Disability, postsecondary education, or unemployment benefits as public benefits under the public charge inadmissibility determination,” but not everyone trusts that will be the case.

“So we’re not just talking about undocumented immigrants that are not going to take unemployment insurance or other forms of cash that are coming for the government,” Jayaraman said.

For many people who are now going into their third or fourth week without income, it is already becoming difficult to keep up with rent and bills and afford groceries.

Audrey Pan, at RAISE, hears that all the time, mostly from undocumented restaurant and delivery workers who have been laid off or had their hours reduced.

“It gets hard sometimes after you read over 100 emails a day saying the same things and needing the same things,” she said. “I get really upset and really angry just at the state of the world and where we are with things. Just wondering, where’s the government? Where’s the aid for these folks?”

RAISE has been offering mini-grants of $200 to undocumented food service workers in New York City through its own small emergency fund to try to meet some of that need.

“We know it’s not much,” Pan said. “That’s something we stress to folks who apply for the funding, we say that this $200 isn’t going to solve your financial issues, and isn’t going to be able to pay for everything, but we just hope that it can provide a little bit of immediate assistance.”

When she first read about it, a couple weeks after getting laid off, she remembers thinking, “I hope my application goes through, I hope they can consider my situation, I hope they can help in any way.”

Within a day or two, she got an email back: her application was accepted. They sent her the money immediately.

“I was so happy. I remember that day that I cried,” she said. “With that money I went to the store and I got two bags of chicken, four bags of rice, two bags of beans and oil.”

With that food, and the $60 she had left over, she started to feel like, “okay, I can survive this.”

She’s still stressed, though, all the time. She worries more about her parents than herself. About them getting sick, about them being exposed to the virus, about the fact that she can’t help them much financially.

“I wish I can just go outside and work, I don’t know, cleaning the streets or a grocery store, but I cannot do that because I don’t have the proper documents,” she said. “I feel hopeless. I feel like I cannot help. I feel like I’m not doing a good job taking care of them.”

She doesn’t even know how she’s going to take care of herself. She had already drained her savings before the coronavirus, after an accident left her injured and unable to work for more than a year. She had only been back to work for four or five months when she got laid off. Now, with no savings and no job and no end in sight, she’s trying not to get overwhelmed. But it’s hard.

“What this pandemic is doing is laying bare how faulty our entire social system has been up to this point. This is a test of all of the policies and programs we have in place to support the most vulnerable in our communities,” said Solis, of Make the Road New York.

“It’s a moment where we’re understanding that those most essential to taking care of our community are oftentimes those most at risk, and those without the most protections. And this is a moment to ensure that everyone is included and being taken care of.”