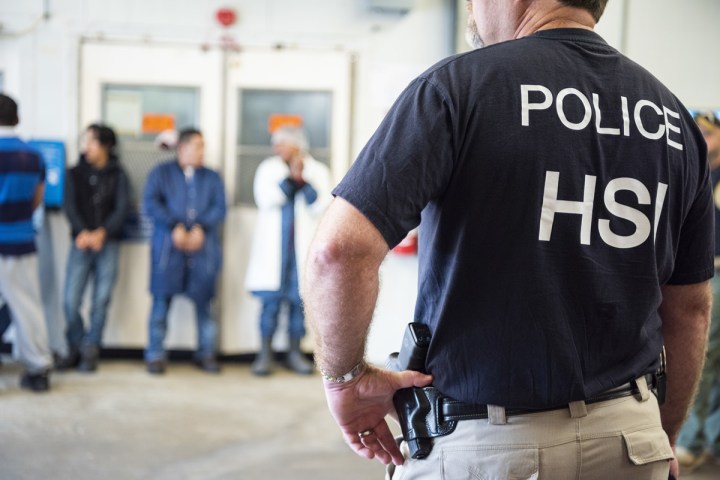 ICE agents executing a federal search warrant at a poultry processing plant in Mississippi on Aug. 7, 2019. Photo courtesy of ICE

Every day for the last year or so, since he was 15, Ivan had the same routine: wake up, go to school, and then go straight to work at PH Food, a poultry processing plant in his hometown, Morton, Mississippi. His parents worked there, too.

Then came Aug. 7, Ivan’s second day of 11th grade, and what would turn out to be the largest workplace immigration raid in a decade, the largest ever in a single state.

Early that morning, while Ivan was at school, Immigration and Customs Enforcement raided the plant where he and his parents worked, another plant in Morton, and five more in nearby towns. They arrested 680 people, including both of Ivan’s parents. Ivan asked that we not use his last name because he and most of his family are undocumented.

In the two weeks that have passed since that day, things have only gotten worse for those 680 people and their families. Many are now trying to figure out how to pay rent, buy groceries and support themselves with no income.

“You’re talking about people who live on a razor thin margin to begin with, who are not able to access government programs, in many instances, who live, like so many of us, paycheck-to-paycheck,” said Cliff Johnson, the director of the MacArthur Justice Center at the University of Mississippi School of Law. Johnson has been working to help coordinate the response effort, raise money and offer legal help to families affected by the raids.

“Now, they’re immediately thrust into a situation where there’s zero income in the house. And so we have rent and mortgage payments coming due at the end of the month. We have car payments coming due. We have payments on appliances and furniture that’s being financed over time. And many of those payments won’t be made. We could see a flood of evictions and repossessions, of foreclosures, of real legitimate food scarcity.”

When so many people in a rural area lose jobs all at once, it can also have a significant economic impact on the wider community. An American Immigration Council report found that a 2006 workplace raid in Marshalltown, Iowa, where 90 people were arrested, “contributed to a localized economic recession for perhaps six months to a year after the raid.”

“It reverberates beyond families into the community,” explained William Lopez, a professor at the University of Michigan School of Public Health who studies the impact of immigration enforcement. “We talk about these communities as if they’re just particular groups in one corner of the city, or one corner of the county. But Latinos and immigrants are part of many of our communities, especially in the Midwest. We go to the same stores as white citizen peers who live in the same area, right? So if you pull half of this community out of the economy … the whole community will suffer.”

Gabriela Rosales, who lives in Morton is already seeing that happen. Most people in town, she said, worked at either PH Food or Koch Foods, which was also raided, or have family that did.

“They left nobody,” Rosales said. “They took everybody. It’s a ghost town right now.” The arrests and the sudden mass unemployment are affecting everyone, she said. A significant percentage of the customer base for many local businesses essentially vanished overnight.

“Right now, the economy here in Morton is very, very low. I mean, the stores are closing because there’s nobody coming in,” Rosales said. “There’s a vegetable market here in Morton, and the lady’s going to close down because all her food and vegetables are going bad.”

In Iowa, the year after the Marshalltown raid, the American Immigration Council found the state recorded a more than 3% drop in retail sales. A bank that handled a lot of accounts for Latino business owners reported a major drop in business. Foreclosures on homes owned by Latinos in the area rose by 50%; most of them had belonged to families that left or were deported after the raid.

Lopez and Nicole Novak, a professor at the College of Public Health at the University of Iowa who researches the health and well-being of immigrants, have been studying the impact of raids ICE carried out in 2018 in Mt. Pleasant, Iowa, Bean Station, Tennessee, Sumner, Texas, and O’Neill, Nebraska. All four towns are rural, remote places where immigrants were working in agriculture or manufacturing plants, much like in Mississippi. And in all four, the ripple effects of the raids got worse as time went on.

“Across the board, every site we’ve talked to, there was a huge wave of donations at the beginning. But a lot of people aren’t aware of just how long these impacts last,” Novak said. “And that’s an uncomfortable thing for the people who are trying to coordinate the response in those communities, is that even a year out there’s actually still a lot of financial needs.”

Bond, for one, can be thousands of dollars. Making phone calls to relatives in jail is expensive. There are court fees and lawyer’s fees, and that’s all on top of the everyday living expenses, like rent, food, car payments, utility bills, childcare.

“In terms of financial impacts, we see that raids incur a lot of costs for the family of the person who is arrested. And they also result in a pretty dramatic loss of income,” Novak said. “So it’s a bit of a double whammy for the family where they have more costs, but then the person who was arrested is no longer earning an income, and is often actually barred from continuing to work while they go through that process with immigration court.”

Even when someone is released from detention, as several hundred people have been so far in Mississippi, “that doesn’t mean that the raid didn’t happen to them. They’re probably still in some sort of proceedings with immigration court,” Novak said. “They have a very long road ahead of them.”

One of the most challenging things about workplace raids, in particular, is that often “the primary breadwinner of the family is detained. So this can just be economic havoc for these families,” Lopez said. Often, when one or both parents are arrested, teenage children end up dropping out of school so they can work, “to get any type of income for the family,” he said. “And this changes all sorts of family dynamics.”

That’s what Ronald saw happen last year, after ICE arrested more than 30 people at the Midwest Precast Concrete plant in Mt. Pleasant, Iowa, where he lives. Ronald, who did not want to share his last name or his immigration status, for fear of retaliation, is a soccer coach at the local high school. Several of the boys on his team had parents who were arrested in the May 9 raid.

For the rest of his life, Ronald said, he’ll remember what happened that day, and how devastated his players were. “The boys cry, and they start to beat the wall, and they asked me, ‘Tell me coach, why is this happening to me? Tell me why? Just tell me why?’” They were just crying and crying, he said, “and trust me, I start crying too.”

Not long after their parents were arrested, several of those boys left school to start working, to help support themselves and their families. One, Ronald said, is now entirely on his own after his father, his only family in the country with him, was deported.

“After these situations, in any family, somebody needs to take care of the rest of the family,” he said. “They are only 16, 17, and now they start to live the adult life.”

Ivan had already started to live an adult life, before his parents were arrested. He started working at the plant because he felt it was his duty to his parents, who were struggling to support him and his three siblings, and their extended family back home in Guatemala.

“I made the decision to help them with that because I saw how hard they worked,” he said. “And my parents are getting old and can’t endure working so much. They get really stressed out.”

Just days after his parents were arrested in the raid, though, Ivan lost his job at the plant, too. In the space of a week, his family went from three incomes to zero. They have no savings — any extra money they had before they sent to family back in Guatemala. They don’t know how they’re going to pay rent or eat. If it weren’t for help from a local organization, Ivan said, they’d be in the streets.

PH Food would not comment, either about the raid or about the subsequent firings. But Ivan said he and dozens of others went into work one day and “they said they didn’t want any more people like us. They didn’t give us a logical explanation, nothing. We arrived and they said there was no more work. Leave.”

Given the scale of the raid and the extent of the news coverage, organizations on the ground say donations have been pouring in from around the country and the world, everything from money to food to clothes. Neighbors and teachers and churches have been stepping up to help. Volunteer lawyers and activists and community organizers have descended to try to coordinate a response, and match families with resources. But even so, the extent of the need is overwhelming.

Take covering rent — just rent — for almost 700 families. “I suspect that could cost upwards of half a million dollars,” Johnson said. “How long can we, without any government assistance … how long can we continue to do that? To pay everyone’s rent, and their car payments, and for their food? We don’t know the answer.”

“We’ve had disasters in Mississippi before,” he said. “When we had Hurricane Katrina, the government came in. Brought billions of dollars in relief funds. When we had the BP oil spill, the government came in and brought billions of dollars and assistance for affected businesses and families. What government entity is going to provide money for these people? These people who are about to be homeless, and trying to figure out where they’re going to get their next meal? You know that’s not coming.”

Ivan and his family know it’s not coming, too, and that the help they’re getting right now from people and organizations in Morton will run out. And they’re afraid about what’s going to happen if they can’t get jobs, soon. They’re considering moving out of state, possibly to Alabama, where someone has offered them jobs.

The family doesn’t want to move, Ivan said, but unless something changes, it might be their only option. His younger siblings are depending on him and his parents to eat. So are his grandparents and aunts and uncles back in Guatemala.

“It would be difficult to move to a new state because you have to adapt to a new city and I’m used to things here, I’m happy here,” he said. “It’s a small town, but I have — well, I had, everything I needed to be happy.”