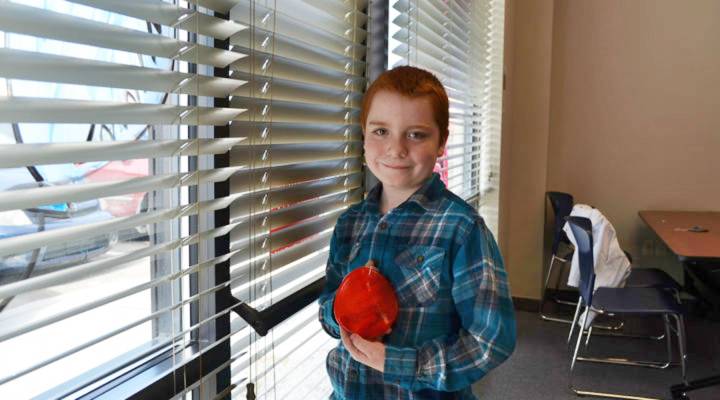 From the outside, it would be easy to mistake the Pennsylvania Cyber Charter School for a place to get your taxes done or mail a package. The downtown Erie branch is tucked away in a strip mall, across from a Big Lots discount store and a U-Haul storage center. But inside, a dozen or so kids are gathered around tables, making colorful sun catchers to understand how a liquid becomes a solid.

“Basically, you make Jell-O, but no clumps in it, and then put it on a plate and then let it dry,” explained third-grader Jakob Pandolph.

Most school days, Jakob and his older brother and sister log on from school-issued laptops at home in rural Union City, Pennsylvania, outside Erie. But on Tuesday afternoons, the family drives 30 miles for this face-to-face Science Explorers class.

“Everything that a traditional public school does, we essentially do that — just in a slightly different manner,” said Brian Hayden, CEO of PA Cyber, the largest and oldest online public school in the state.

Kids also get together at the Erie building for art and music. They take field trips and have German and Spanish clubs. There’s even P.E., done with at-home fitness kits that include yoga balls and jump ropes.

“We are a real school,” Hayden said. “I think sometimes that isn’t the perception that people have, that we have a bunch of kids sitting in a dark room in front of a computer, isolated from the world, and that’s not what this is.”

What it is to the parents of almost 11,000 students enrolled around the state is an alternative to traditional brick-and-mortar schools they say haven’t worked for their kids. Some families have religious or safety concerns about public schools, or kids with learning disabilities.

Bridget Dolak’s 8-year-old daughter, Laney, has a seizure disorder and struggled at a traditional school.

“Now her reading is a high third-grade level — she’s in second grade — and her math is on grade level,” Dolak said. “This place is a godsend for us. It’s been wonderful.”

It’s also been like a second job for Dolak, who works from home as a social worker.

“At first, it was definitely an adjustment,” she said. “I had to be there all the time, but now she’s getting much better at working independently.”

Laney is in the “blended classroom” program at PA Cyber. She takes one online class every week, in English, math, science and social studies. The rest of the time she works on her own, watching video lessons and doing graded assignments.

For more structure, families can choose the “virtual classroom,” which basically mimics regular school. Classes are taught online by live, certified teachers via webcam. Students from all over the state interact using their computer’s microphone or by typing.

“It’s pretty much the same as a normal classroom,” said Caleb Pandolph, 12. “You just have to hit buttons to raise your hand and talk.”

Around 40,000 Pennsylvania students, or about 3 percent, are now enrolled in cyber charter schools, which are publicly funded but privately run. U.S. Education Secretary Betsy DeVos is a proponent of virtual schools, and the Trump administration has proposed funding to expand public charter schools. But as virtual schools have grown here and around the country, so have concerns about their performance and oversight. Last year, PA Cyber’s founder pleaded guilty to tax fraud for siphoning millions of dollars from the school. The nonprofit school is under new management.

While there are individual success stories, “every time they do a study that looks purely at academics, the cyber charter schools underperform compared to the traditional public schools,” said Bryan Mann, an assistant professor of education policy at the University of Alabama. He wrote his doctoral dissertation on Pennsylvania cyber charter schools.

One national study from Stanford University found that, compared to similar students at traditional schools, cyber students were 72 days behind in reading, on average. They fell 180 days, or a full school year, behind in math. In Pennsylvania, cyber charters consistently perform worse than brick-and-mortar schools on state accountability measures.

Mann said there’s a mismatch between the types of students who do well in a cyber school setting and those who tend to enroll in cyber schools.

“The student has to be kind of a self-starter, independent, or have a lot of support at home,” he said. “The struggle here is that the students for which the traditional public schools didn’t work are often not that student.”

When those students fail online, they often end up back at the local public school, often far behind.