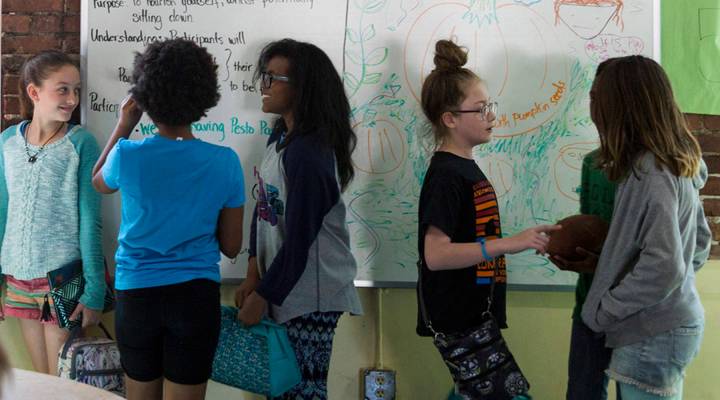 Every year, some parents worried about their kids’ educations in Georgia play the lottery.

That’s what they did at the Academy for Classical Education, called ACE by locals, in Macon, Georgia, back in February, when the school held its admissions lottery.  Each child’s application translates to their name being placed in the lottery pool one time. After being disappointed last year, Sammy Smith is back again this year, just to see where his daughters land on the waiting list.

“They’re at Springdale now, which is decent,” Smith said, referencing a nearby traditional elementary school. “We just prefer the Classical Education.”

Actually, Springdale Elementary outperforms the charter school academically, but about a quarter of the white students in this majority black school district go to ACE.  It’s a district where half of all the elementary schools are considered failing by the state and 40 percent of students live below the poverty line.

Smith was trying to exercise school choice, the educational buzzword that is the cornerstone policy of Secretary of Education Betsy DeVos. As charter schools become more popular, though, some worry that the choice isn’t being offered to everyone, and that charters may be helping re-segregate school districts. So is there a way to use the lottery to short-circuit that trend? On the morning of the lottery, Laura Perkins, the principal at ACE, she said she didn’t think there was.

“We don’t have any control over that,” Perkins said. “The charter rules don’t allow you to do any of that.”

But Matt Underwood, principal of the Atlanta Neighborhood Charter School in Atlanta, said Georgia charter schools do have a way to give some low-income kids a boost.

“I see this as a no brainer to use,” Underwood said.

He’s was talking about a weighted admissions lottery, something that became legal in Georgia over a year ago. Weighted lotteries allow charter schools to give better numerical odds to disadvantaged students. So instead of a kid’s name being entered once, in Georgia, it can be entered up to five times. Three other states, Louisiana, Arkansas and Rhode Island, also explicitly allow weighted lotteries. Underwood said it’s a tool to fight racial segregation, since race often correlates with poverty, although weighting for race alone in Georgia is not an option.

The results of the annual admissions lottery are posted on the wall of the cafeteria at the Academy for Classical Education while parents wait for weighting list results this past February.

“I personally don’t think it really gives charter schools a good name if you see this sort of discrepancy in the demographics of students in schools that are right around each other,” he said.

Atlanta Neighborhood Charter gave economically disadvantaged kids four times better odds of getting into kindergarten this year. That more than doubled the number of kindergartners coming from poverty.

Weighted lotteries aren’t mandatory in Georgia, but of the 80 or so schools that could use them, only one other school, Drew Charter in Atlanta’s East Lake neighborhood, has done so.

Brian Beabout is a professor of educational leadership at the University of New Orleans. He said there is a  term for these segregated schools.

“People have called those ‘white flight academies’ in that they are simply ways for middle-class populations to sort of create a publicly financed private school,” Beabout said.

Beabout is supportive of charter schools. In fact, he’s a board member of the National Coalition of Diverse Charter Schools. He says of course not every charter school is a “white flight academy,” but those that fit the pattern should get a harder look.

“I think they ought to face some public pressure,” Beabout said. “Is there public will to move in one direction or the other?”

About a month after the ACE lottery, I approach Perkins, the school’s principal, about the idea of giving low-income kids better odds of getting through the front door.

“It’s not my job to say you need it more than I need it,” Perkins said. Still, she might look at a weighted lottery.

“We’ll put it before the governing board and give it a whirl,” she said.

And of course parents could ask for it when the Academy for Classical Education’s charter comes up for review in two years.