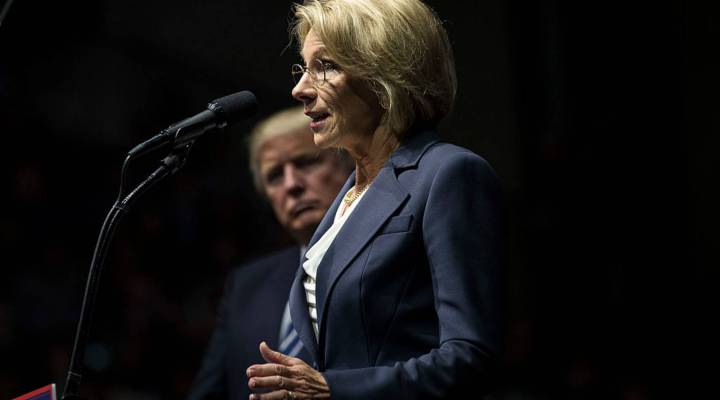 COPY
President-elect Donald Trump looks on as Betsy DeVos, his nominee for Secretary of Education, speaks at the DeltaPlex Arena on Dec. 9 in Grand Rapids, Michigan. Drew Angerer/Getty Images

President-elect Donald Trump looks on as Betsy DeVos, his nominee for Secretary of Education, speaks at the DeltaPlex Arena on Dec. 9 in Grand Rapids, Michigan. Drew Angerer/Getty Images
Listen Now

At a rally near Grand Rapids, Michigan earlier this month, Betsy DeVos echoed a familiar line from the Trump campaign, saying it was “time to make education great again in this country.”

“This means expanding choices and options to give every child the opportunity for a quality education, regardless of their zip code or their family circumstances,” she told a cheering crowd.

For DeVos, President-elect Donald Trump’s nominee for Education Secretary, a big part of school choice is charter schools, which are publicly funded, but privately managed. The billionaire philanthropist has spent decades and millions of dollars promoting their growth in her home state of Michigan, where about 80 percent of charter schools are operated by for-profit companies. That’s compared to less than 13 percent nationally.

If confirmed, DeVos could use her position to fuel the growth of charter schools, said Thomas Toch, an education policy expert at Georgetown University.

“The federal government provides hundreds of millions of dollars a year for charter school expansion, and she could increase that spending,” he said.

But the results in Michigan have been disappointing, Toch said. In Detroit, where more than half of students attend charter schools, a study from Stanford University found that nearly half of charter schools in the city perform better than traditional public schools. But compared to other large cities, Detroit ranks last on national tests of reading and math.

Toch blamed, in part, limited regulation of charter schools in Michigan, which lifted a cap on the schools in 2011. Last Spring, DeVos fought legislation that would have increased charter school oversight and prevented failing operators from opening new schools in Detroit.

“An unregulated market produces lots of both financial and educational failure in the charter sector,” Toch said.

DeVos’s positions on charter schools and school vouchers have attracted criticism from many public school advocates.

“She wants to outsource, uncritically, unaccountably, public education,” said Cornell William Brooks, president of the NAACP, which earlier this year called for a moratorium on charter school expansion. “If you look at the record in Michigan, it’s — as some people would put it in colloquial terms — a hot mess.”

All of Michigan’s public schools need to better, said Dan Quisenberry, president of the Michigan Association of Public School Academies, which represents the 300 charter schools in the state. But he rejected the idea that DeVos would be too soft on charter schools.

“I totally expect if she’s confirmed, that she will hold all of us accountable and she wouldn’t hesitate to pick up the phone and say, ‘Dan Quisenberry, you’ve got some work to do in Michigan with the charter schools there,’” he said.

But the growing backlash against charter schools could limit their growth. Even in Massachusetts, with some of the most well-regarded charter schools in the country, voters recently rejected a ballot measure that would have significantly increased their numbers in the state.

To find out more about Trump’s cabinet picks, click here.