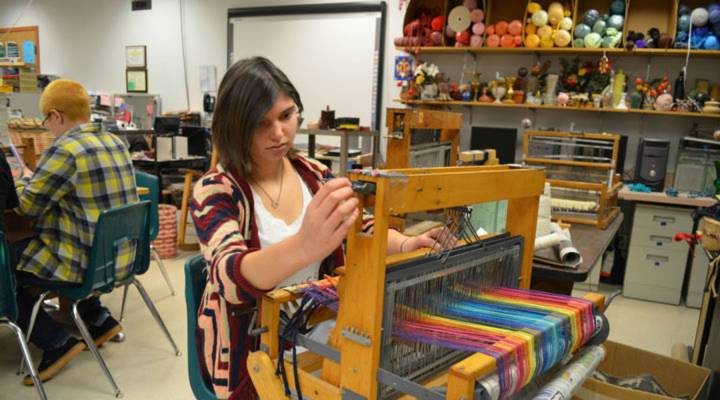 COPY
Weaving is one of the skills taught at Union City High School, where Emily Adams, 16, is a rising senior. Amy Scott/Marketplace
The Big Promise

Weaving is one of the skills taught at Union City High School, where Emily Adams, 16, is a rising senior. Amy Scott/Marketplace
Listen Now

Union City, Pennsylvania, is a rural town, with one elementary school and one middle and high school. Every spring there’s a drive-your-tractor-to-school day. In teacher Martha Blair’s arts and crafts class, students learn to weave saddle blankets and gun straps.

“They’re all learning how to use the looms, but they’re making something that’s useful for them,” Blair said, showing off the students’ work during the spring semester.

Union City was once known for furniture making, but in the last 15 years, the lumber mills and chair makers have closed. The hospital and newspaper are gone.

“Right now I’d say the one strong institution that kind of keeps the whole community together is the school system,” said Dave Robinson, who directs the Union City Family Support Center, a social services organization, and sits on the school board.

More families are opting out of that system and sending their kids online. Last school year, 35 students from the district were enrolled in cyber charter schools, which are publicly funded but privately run. That’s out of about 1,100 students. Each child who leaves takes about $10,000 in school funding with them — $20,000 if they have special needs, Robinson said, but many of the costs that money helped cover remain.

“There’s infrastructure in a school district that’s there whether we’re educating a thousand kids or 500 kids,” he said.

There are also administrative costs. If cyber students repeatedly don’t show up — or log on— to school, the district is responsible for filing truancy charges and attending a hearing. Last year one student missed 90 days, Robinson said.

When cyber school doesn’t work out, kids often come back to the district school needing extra tutoring and support to catch up. Several high school students have returned after a few years at an online school, said Superintendent Sandra Myers.

“They might have accrued all of two to three credits when we have 28 credits required for graduation,” she said. “To me, that’s a travesty.”

At the Pennsylvania Cyber Charter School, where most of the area’s online students go, just 55 percent of students graduate in four years, statewide. The school has almost 11,000 students. The graduation rate at Union City High is above 95 percent.

“We’re not kidnapping these kids off the street, you know — the families are choosing to come to us,” he said. “I think that is a not just a privilege but a right.”

U.S. Education Secretary Betsy DeVos agrees with him. She’s spent much of her career, and her tenure so far as secretary, promoting school choice and is a proponent of virtual schools.

There aren’t a lot of school choices in rural areas like Union City. Mike and Mary Pandolph sent their kids to a Catholic School in a nearby town until it closed a few years ago because of low enrollment. They chose PA Cyber for the flexibility.

“Especially in my profession as a funeral director,” Mike said. “When I have to go to conventions, these kids can log in at school using the internet from the hotel, so we all actually spend more time together.”

The Pandolphs said their kids are doing well.

“I love that it’s just a short day,” said daughter Addison, 11. “It’s not as long as normal schools are.”

Asked if their kids ever resist logging on, both parents gave an emphatic “no.”

Union City’s brick-and-mortar school isn’t about to take that. To compete, it’s trying to spice up its curriculum with a new STEM academy. It even started its own cyber program, though fewer than 10 kids are enrolled. The district is considering doing some advertising to get the word out.

Correction (August 2, 2017): An earlier version of this story incorrectly stated the number of students in Union City Area School District. The text has been corrected.