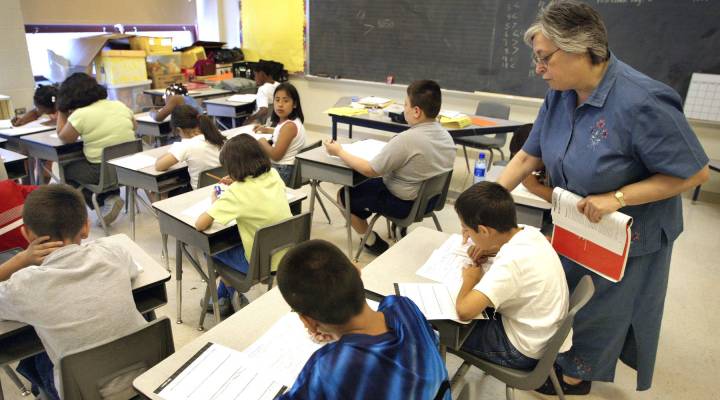 COPY
Testing is expected to be a big topic for this school year.  Tim Boyle/Getty Images

Testing is expected to be a big topic for this school year.  Tim Boyle/Getty Images
Listen Now

The Tuesday after Labor Day is traditionally the start of school for K-12 and higher education students. But not all of them. Several districts across the country start earlier in the summer. The reason why is just one of several stories that Marketplace’s Senior Education Correspondent, Amy Scott, is following this year.

1. Testing
States will be working to implement the “Every Student Succeeds Act” – the replacement for No Child Left Behind that Congress passed last year. “The revision gives states more control over how they use tests,” said Scott. “The law still requires annual testing in reading and math, starting in third grade, that’s not going away.  Where we might see some reduction is the extra tests that districts pile on on-top of those state tests.” Most of the effects of the new law won’t be seen until the 2017-18 school year.

2. Testing, Part II
Tests could also be the reason why districts start the school year earlier. “This is partly about getting enough class time in to end the semester for winter break, rather than taking a week off for winter and then coming back to finish up the semester in January. This also gives schools more time to prepare kids for standardized tests and AP exams.” But the good news, said Scott, is that when schools start earlier, they usually end earlier too.

3. Lengthening the School Year
This is popular especially among some charter schools that want to stop summer learning loss. “There’s a concern that many low-income kids in particular who don’t have the summer camps and the family trips to national parks that kids from wealthier families have are missing out and need to spend more time in school.”

4.  Charter Schools
Speaking of charter schools, expect to see plenty of debate about the benefits and consequences of independently run public schools.  Families who like charter schools point to successful examples while others, like John Oliver in an episode of Last Week Tonight, underscored some of the problems the schools can have.

5. The Presidential Election
Surprisingly, neither Republican nor Democratic candidate for president has talked much about education. Most of what we’ve heard from them has been about college tuition and the cost of attending – an issue that motivates young voters.