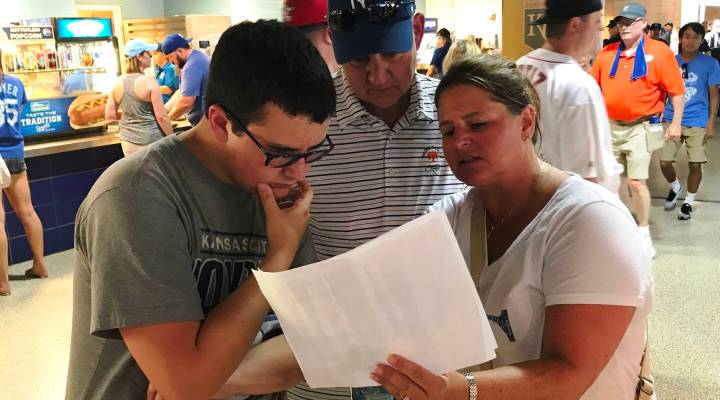 COPY
The Bennett family had a difficult time locating the quiet zones and special concession stands the team has created this year for those on the autism spectrum. Laura Ziegler/for Marketplace

The Bennett family had a difficult time locating the quiet zones and special concession stands the team has created this year for those on the autism spectrum. Laura Ziegler/for Marketplace
Listen Now

Many people on the autism spectrum have a hard time in loud, chaotic places like sports stadiums. But a number of professional sports teams are trying to make it easier and more fun to attend games for those with autism and other special needs. Among them are the Kansas City Royals, who have put some accommodations, such as quiet zones, in place at Kauffman Stadium.

According to the Centers for Disease Control and Prevention, one in 68 children is on the autism spectrum. And the Royals want these kids and their families to feel comfortable in their stadium, says Royals spokesman Toby Cook. “We like selling the tickets but we really also like filling the stadium up with fans,” he said. “But there’s the rub. Because the more people we have here and the greater the volume level, the more we have to be sensitive to people who have a sensitivity to that.”

Ryan Bennett, who has autism, and his family attended a recent game against the Boston Red Sox to see how well some of those accommodations work. Early in the game, he’s indifferent to the fact the Royals are losing. He’s sweating. “It’s really hot out here,” he said, mopping his brow with his arm. Ryan hates the heat – it makes him anxious. The unpredictable loudness, he said, makes him fidgety.

“There are times I feel like I wanna plug my ears….like now,” Ryan said as the crowd roared. But Ryan doesn’t like to stand out – so he waits until the noise subsides. “I feel like I’m being rude by doing that and I don’t want to be rude.”

By the 5th inning, Ryan has had enough. So he and his mom and dad, Rick and Kathy Bennett, set out with a map to find the new quiet zones the Royals have created to help those on the autism spectrum. Pausing to scrutinize the small map as they wander the concourse, the family looks for signage that might indicate where they should be going.

It takes a while, but they find an usher who points them in the right direction. That extra 15 or 20 minutes spent trying to find the quiet zone is really hard for someone like Ryan, whose anxiety level is already high. Rick Bennett said the stadium map needs to be clearer and the identifying markers on the map should match those inside the stadium to be useful. And the family said the signs for the quiet zone were too small. “There’s a lot of those on the spectrum who are not going to engage somebody and ask for directions,” Rick said. “They take things very literally.”

Once he and his family found the quiet zone and Ryan spent some time there, he felt better.

While there may be some kinks to work out, the Kansas City Royals would like kids on the spectrum to come to a game any day they want — and, ideally — stay until the end.