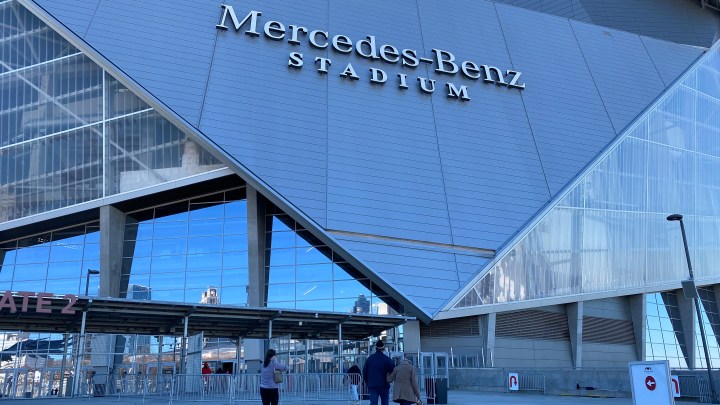 People trickle into Mercedes-Benz Stadium in Atlanta to receive COVID-19 vaccinations at the site run by the Fulton County Board of Health. Sam Whitehead
COVID-19

People trickle into Mercedes-Benz Stadium in Atlanta to receive COVID-19 vaccinations at the site run by the Fulton County Board of Health. Sam Whitehead

But on a recent breezy winter afternoon, there was just a slow trickle of recently inoculated people leaving this pop-up COVID-19 mass-vaccination site.

“Everything inside ran very smoothly,” said Laura Gilmore, who just got the first shot of her two-dose regimen. “It’s so well organized, and everybody is so helpful,”

The 85-year old, who lives in Atlanta, said it’s her first time at the stadium, and she was impressed. The $1.5 billion facility opened in 2017 and is also home to the Atlanta Falcons football team.

“So now I have to make an appointment to come down and take a tour after all of this is all over,” Gilmore said, smiling.

Public health agencies across the country are working to get as many COVID-19 vaccine doses into as many arms as quickly as they can.

And some are going big, setting up mass-vaccination sites in convention centers and stadiums shut down because of the pandemic.

In Georgia, health officials in Fulton County are collaborating with the owners of Mercedes-Benz Stadium in a partnership each hopes will give the vaccine rollout effort a boost.

On its busiest days, the stadium has seen more than 1,500 people for vaccinations, but it could double that, said Dr. Lynn Paxton, Fulton County’s health director.

“Our capacity really is, I would say, limited mainly by the vaccine availability,” she said.

“You need tables. You need lots of chairs for people to wait in,” she explained. “Mercedes-Benz Stadium made all of that available.”

Paxton said the stadium is also providing snacks and coffee and staff to help with clerical work, all of it for free.

But there is an upside for AMB Sports and Entertainment, the company that owns the stadium and the teams that play there.

“Certainly it helps us as a sports organization,” said Dietmar Exler, the company’s chief operating officer. “The faster people get vaccinated, the faster we’ll have events in our stadium.”

A handful of other NFL stadiums around the country are also serving as mass-vaccination sites. In a letter to the Biden administration in early February, Commissioner Roger Goodell said all the league’s teams were open to joining in that effort. 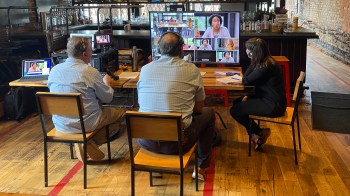