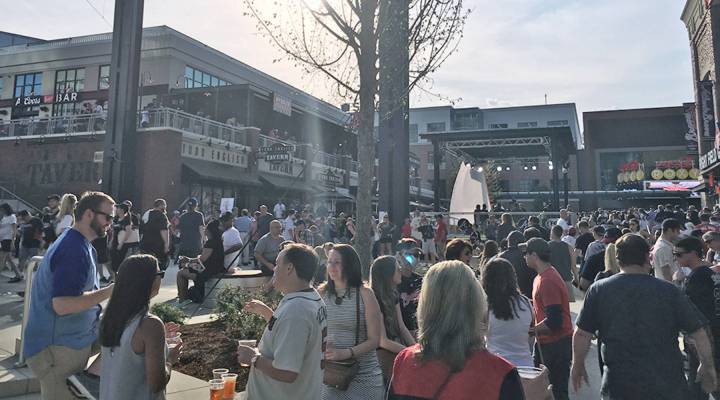 COPY
Thousands of fans congregate in The Battery outside SunTrust Park during the Atlanta Braves' home opener. Stephen Fowler/GPB

Thousands of fans congregate in The Battery outside SunTrust Park during the Atlanta Braves' home opener. Stephen Fowler/GPB
Listen Now

Nestled in the shadows of SunTrust Park, Doc’s Food & Spirits has been a fixture in the community for 35 years.

But since the Atlanta Braves’ billion-dollar stadium development opened in April, the tavern’s General Manager Martin Neff noticed something: an increase in the number of customers.

“More of them are coming after the game, including people who work at the stadium,” Neff said. “We’re a late-night establishment, we’re open until four in the morning. So we’re providing a service for even employees that work at The Battery.”

Inside The Battery, you’ll find standard shopping and dining fare. But with high-end apartments, office space and a concert venue, the team’s business model has moved beyond hot dogs and beer.

Officials hope The Battery will keep fans engaged year-round and make it worth the $400 million it will cost taxpayers.

It’s part of a growing trend — sports teams create an “experience” for fans, fans stay before and after games, and the team makes more money.

As Doc’s Food & Spirits shows, it’s not just the team that stands to gain.

The park sits in the middle of the Cumberland Community Improvement District, a 6 1/2 square mile area that taxes commercial businesses to improve its transportation infrastructure.

“Since the Braves announced back in 2013 to now, our property values have increased 15 percent ­­— that’s adding $675 million in property value to this district,” Rivers said.

Despite all of this, one lingering question is whether The Battery has a big enough footprint to pay off $18 million a year in debt service costs.

Roger Noll is skeptical. As economics professor emeritus at Stanford, he’s studied the impact sports stadiums have on local economies.

Noll said the best case is a windfall for all involved, but that’s rare.

And worst case? “It sort of fades away and becomes an eyesore and not a financial success. And essentially the county is left absorbing the entire cost,” Noll said.

With local taxpayers on the hook for almost $400 million, a lot of people from both the team and the community are hoping this development won’t strike out.