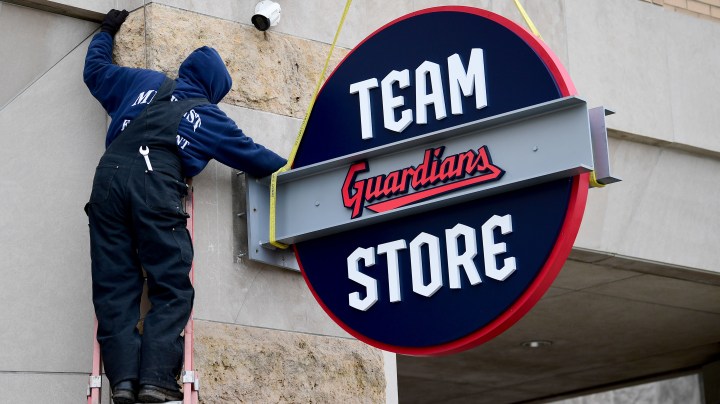 COPY
The team changed its name after being pressured to drop branding that many people considered racist. Emilee Chinn/Getty Images

The team changed its name after being pressured to drop branding that many people considered racist. Emilee Chinn/Getty Images
Listen Now

Besides that new collective bargaining agreement, there’s something else of note in Major League Baseball: The team from Cleveland is now playing under the name “Guardians.” It retired its Native American name and mascot.

So did Washington’s NFL team, which is now known as the Commanders. Economic pressures played a role in turning the corner in a long campaign.

We’ve had strong evidence since the early 2000s that Indian mascots are harmful, said Arianne Eason, a professor of psychology at the University of California, Berkeley.

“More than two decades of research shows that the use of Native mascots decreases Indigenous youth’s self-esteem, community worth and what they hope they can accomplish in the future,” she said.

Eason’s work finds that these mascots also promote racist stereotypes of Native people as “aggressive or savage or primitive.” That can make sports fans feel comfortable dressing up in redface or hurling racist slurs at opposing teams.

The American Psychological Association called for the retirement of these mascots in 2005, but it took 15 years and a different incentive for some pro teams to make the change.

“I think we can say conclusively in the end it’s money,” said Kenneth Shropshire, CEO of the Global Sport Institute at Arizona State University.

In the wake of George Floyd’s murder in 2020, he said, there was a national push to retire racist branding. That put a spotlight on the Washington, D.C., football team.

“And that motivated a couple of key sponsors — FedEx and Nike — to say, ‘You gotta change the name,'” Shropshire said. And the team did, rather than lose those sponsorship deals.

Crystal Echo Hawk, a citizen of the Pawnee Nation of Oklahoma and director of IllumiNative, which focuses on media portrayals of Native people, said Black Lives Matter helped advance this issue.

“The ground had already made fertile, right, and had been sort of sowed and tilled over decades and decades of Native-led organizing.”

And nearly 2,000 K-12 schools across the country still use Indian mascots, according to the National Congress of American Indians.