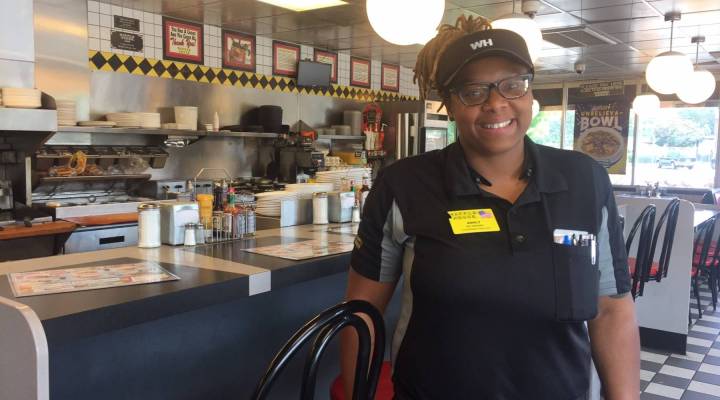 COPY
Ashly Johnson recently finished a manager training program with Waffle House, where she learned how to run a restaurant -- and manage her own personal finances better. Elly Yu

Ashly Johnson recently finished a manager training program with Waffle House, where she learned how to run a restaurant -- and manage her own personal finances better. Elly Yu
Listen Now

At a Waffle House south of Atlanta, Ashly Johnson stacks clean plates above a metal grill after the morning rush to start preparing for lunch hour.

“I was spending way too much money on food. I need to cook more,” she said.

As a new manager, Johnson’s income is in the $40,000 range. The financial coaching program offered by Waffle House guides manager trainees on things like how to get rid of personal debt or save up for emergencies.

“I realized that I go out a lot, and so that I need to cut back,” Johnson said. “Sometimes when you’re just spending money, you’re not really realizing what you’re spending your money on or how much money you’re spending until you actually look at it all on paper. And I’m like ‘Wow. I spent that much money?’”

Waffle House is among a growing number of companies, including The Home Depot and Havertys Furniture, that are offering what are called “financial wellness” programs for employees. The company pays for the program, and it’s free to the workers.

Michal Grinstein-Weiss, a professor of social work at Washington University, said these programs have grown since the recession as financial worries have carried over to the workplace.

“Financial concerns are reported to be the single greatest source of stress,” Grinstein-Weiss said.

Surveys have shown that more than half of Americans are worried about their money, and Grinstein-Weiss said companies have started to notice. For example, companies have seen lower 401k participation rates or wages being garnished.

She said employers have also realized that more focused and engaged employees could help the bottom line. But Grinstein-Weiss, who’s been researching financial wellness programs, says the verdict is still out on how well these programs are working as the field continues to grow.

SunTrust Bank is selling its financial wellness program, called Momentum onUp, to about 40 companies, including Waffle House. Brian Ford, financial well-being executive at SunTrust Bank, says one of the goals of the program is to help all employees at a company, including lower-wage workers.

“Regardless of income, people need financial literacy. That’s as true on the low-end as it is on the high-end,” he said. “There is an underserved population.”

Waffle House says it’s still testing out the program with its manager trainees before rolling it out to the company’s other employees.