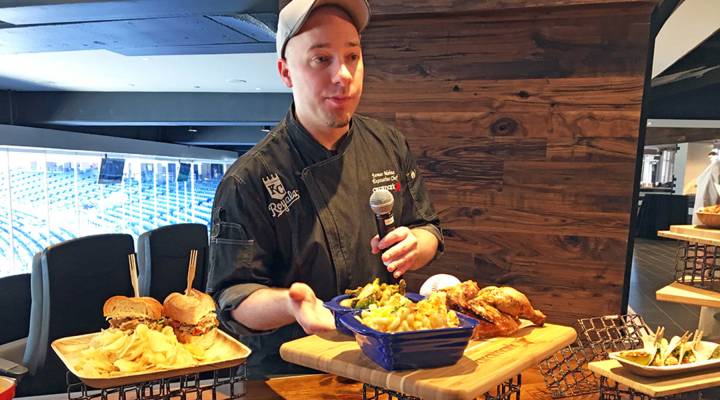 If there was a world series for crazy ballpark food, the Kansas City Royals would be winning.

Kansas City takes two slots on USA Today’s ranking of “10 craziest ballpark foods for the 2017 MLB season”  – more than any other team.

No. 6 is the Royals’ Sunrise Dog, a hot dog loaded with bacon, cheese, white sausage gravy and topped with a fried egg. No. 2 is the pulled pork patty melt, with fried onions, cole slaw, a jalapeno pepper skewer and a funnel cake bun.

“It’s fun. It’s whimsical. It takes a little bit of all different parts of our ballpark here and puts it into one,” he said. “We try to do some fun, crazy, exciting new items every year.”

As Major League Baseball season gets underway, teams around the country are offering a lot more than just hot dogs, peanuts and Cracker Jacks to get fans to care if they ever come back. This season’s new ballpark foods are concoctions that are built not for sales but to get people into the seats.

“[The crazy foods] are more for marketing purposes, perhaps, than actual revenue generation,” Reichard said. “But they do get the team in the headlines at the beginning of the year in a way that’s not totally related to baseball on the field. It reaches a different sort of casual baseball attendee.”

Reichard’s favorite this year is the Brontosaurus Rib at Yankee Stadium, which he said is “basically monster-sized short ribs, something Fred Flintstone would have ordered in Bedrock.” The Seattle Mariners have also received a lot of attention for offering toasted grasshoppers tossed in chili lime salt.

Sean Baska, a loyal Royals fan found tailgating with his friends in the parking lot, said he would try the pork patty melt. And he thinks the sandwich would appeal to everyone, even though it costs $18, he said.

“These days, I think the casual fan will spend money just because of the success of the team,” Baska said.

But whether the food is good is another story. A local food critic reported that the pork patty melt’s slaw was “overabundant” and the funnel cake was “overdone.”