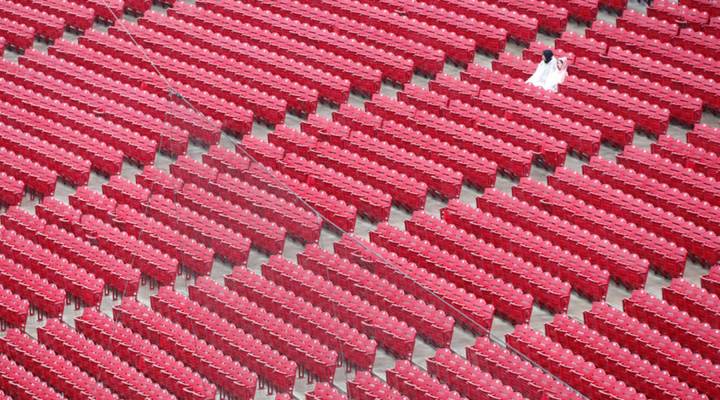 COPY
A pair of fans sit in a large section of empty seats during a rain delay before the game between the St. Louis Cardinals and Cincinnati Reds at Great American Ball Park on April 15, 2018, in Cincinnati. Joe Robbins/Getty Images

A pair of fans sit in a large section of empty seats during a rain delay before the game between the St. Louis Cardinals and Cincinnati Reds at Great American Ball Park on April 15, 2018, in Cincinnati. Joe Robbins/Getty Images
Listen Now

It’s the halfway point in the Major League Baseball season, with the All-Star Game happening Tuesday night in Washington, D.C. The good news for MLB is that television ratings are up. The bad news? Leaguewide attendance is down compared to this point last season.

One exception has been the Houston Astros, which won the World Series last year and has one of baseball’s best records so far this season.  At Minute Maid Park on a recent afternoon, hundreds of people lined up at the box office for tickets to watch the Astros take on the Oakland A’s.

Jason Hilbert came out to the park with his 3-year-old son, James. Hilbert’s a public school teacher who grew up in Houston.

“For me, I have three months off and the rest of the year, I’m looking after other people’s children,” Hilbert said. “So this is just an opportunity for me to spend time with my family and actually come out to the ballpark.”

Leaguewide, the average ticket will set you back about 3 percent more than it did last year, according to Team Marketing Report. For the cheap seats, that’s just over $32 a ticket. Hilbert said that doesn’t include all the other stuff he shells out for at the ballpark: Cokes, hot dogs, maybe a beer. It adds up, so, he tries to economize where he can.

“I bought these tickets through Groupon and I think I paid like $13″ he said. Hilbert loves the atmosphere at the stadium. High-fiving strangers after a base hit. Singing “Take Me Out to the Ballgame” in the seventh-inning stretch. Plus, the Astros are on a tear.

“Prior to the last two years, I haven’t seen attendance like this probably in 15 years or so,” Hilbert said as he walked through the metal-detector to grab his seat.

According to Major League Baseball, the Astros’ gate numbers have gone up more than any of the other 30 teams in the league. They’re selling about 6,200 more tickets per game than they did last year. That’s great news for the Astros, but it’s not the norm. Maury Brown runs the research and analytics company Bizball. He said attendance leaguewide is down more than 6 percent from last year. And actual attendance is probably lower. Brown said the official attendance figures aren’t necessarily the exact number of people who turn up. In fact, a game that’s deemed a sell-out could have hundreds of empty seats.

“The numbers that you hear or see in the box score are the tickets that are sold,” Brown said. “And therefore those that are bought up by secondary ticket brokers or from season ticket holders that don’t go to games if the weather is bad, those people are not accounted for at the games.”

The league blames much of this year’s drop in attendance on the weather, and it’s got a point: In the first three weeks of the season, bad weather caused 25 games to be postponed.

Rain-outs aside, Brown said improvements in home viewing are also keeping fans out of the stands.

“Television has gotten much better in terms of its form factor, in terms of its theater aspect ratio, and the fact that you can augment that with additional statistics or a second window with your computer,” he said. “It does make it a lot easier to stay at home.”

That’s exactly what avid baseball fan Greg Stovall does most game nights.  He Grew up in Arlington, Texas, home of the Texas Rangers. He remembers going to the games with his brother and grandfather. But even when he watches at home, he’s got his rituals.

“A lot of times I’ll turn the game on and then I’ll turn the audio on to listen to the radio broadcast, but watch the game,” Stovall said seated on his couch.

Stovall said he still gets to a few Rangers games a year and loves taking his 12-year old daughter Anna. He wants his kid to have the same experiences he had as a child. But he said it’s different now.

“People are doing it online, doing it through the internet, doing it through your smart TV, whatever it is, and us being lazy, people take advantage of that,” Stovall said. “So maybe that’s your answer as far as why ticket sales are down.”

But maybe this year is just a blip. Major League Baseball said more than 72 million fans have turned out to the ballpark each year for the past 14 straight seasons.