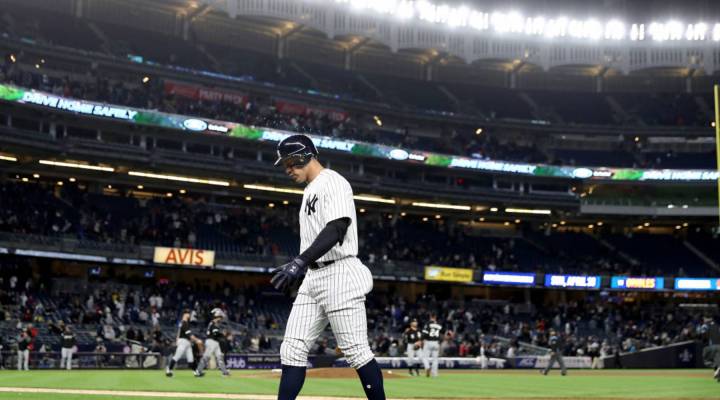 COPY
Tickets at the new Yankee Stadium are more than $50. Above, Aaron Judge walks off the field after he grounded out to end the game against the Chicago White Sox in April. Elsa/Getty Images

Tickets at the new Yankee Stadium are more than $50. Above, Aaron Judge walks off the field after he grounded out to end the game against the Chicago White Sox in April. Elsa/Getty Images
Listen Now

It takes a certain, uniquely New York sort of hustle to sell cold water on a cold day.

But on a recent spring morning, gray and overcast, that’s exactly what Clive Francis is doing outside of Yankee Stadium. It’s the Bronx Bombers’ first game against their rival Boston Red Sox this season, and the crowds are bigger than Francis has been used to lately. He’s not missing the opportunity to turn a buck.

Francis said he lives two blocks away and has been coming out to Yankee Stadium to sell $1 water bottles for seven years. In that time, he’s watched attendance go down.

The Yankees have seen a 42 percent decline in ticket revenues over those last seven years, according to a New York Times analysis. The problems began the year after the team opened its vast new stadium in 2009. The Yankees are having a great season so far — they’re in first place as of this writing — so it’s striking that attendance is still down.

Wayne McDonnell, academic chair of New York University’s Tisch Institute for Sports Management, Media, and Business, said that around the time the Yankees won their last World Series in 2009, they were selling out 98 percent of the seats in their stadium or more. Now they’re hovering between 75 percent to 78 percent.

In the final few years of the old Yankee Stadium, the average ticket price was about $33, according to website Statista.com. Now it’s over $50.

The Yankees don’t share revenue numbers, but a team spokesman doesn’t dispute that ticket sales are down. He said despite the decline, net revenue has actually been up year over year. The team gets money elsewhere, like from more than 130 corporate sponsorships, their cable TV network and renting out the stadium.

“The whole setup of the stadium’s just off,” Decker said. “You’re so far removed from the action. Before you were right on top of it, and you felt like a part of it. Now you’re so far back, and with even more stores, it feels like a mall or one big commercial. It’s a different energy.”

Clive Lewis, a principal at the architecture firm Hassell who has spent the last 20 years building sports arenas around the world, said that “shopping mall” experience is a trend in stadium design that’s catching on worldwide. In Europe, he said, they aspire to commercialize their arenas as well as Americans do. Especially with slow-moving sports, like cricket and baseball, Lewis said, teams want to give fans a reason to come to the ballpark instead of simply watching at home or online.

McDonnell said the Yankees are experimenting with ideas to improve the experience at their new stadium.

“The Yankees did a lot of creative things this offseason, and a lot of reconstruction in the ballpark, to create these new fan engagement opportunities,” McDonnell said.

Among them: new communal areas, a kids’ playground in right field and “The Judge’s Chambers,” an 18-seat area replete with long, black judge’s robes and foam gavels for fans to cheer on the team’s new rookie star, Aaron Judge.

What the Yankees didn’t do is lower ticket prices. McDonnell said doing so can box a team in.

“If you start to lower your ticket prices, you’re going to devalue the overall quality of the product,” McDonnell said. “You’re telling the fans that the Yankees aren’t worth what they once were.”

Longtime fan Decker doesn’t begrudge his team the need to make money. But he doesn’t need the fancy bells and whistles of a new “retail” stadium, he said.

“Lessen up the business approach to the fan experience,” Decker said. “I don’t think it has to be such a corporate thing. It’s baseball.”

Anything else he’d want to say if he talked to management?

“I got nothing else,” Decker said. “Go Yankees.”