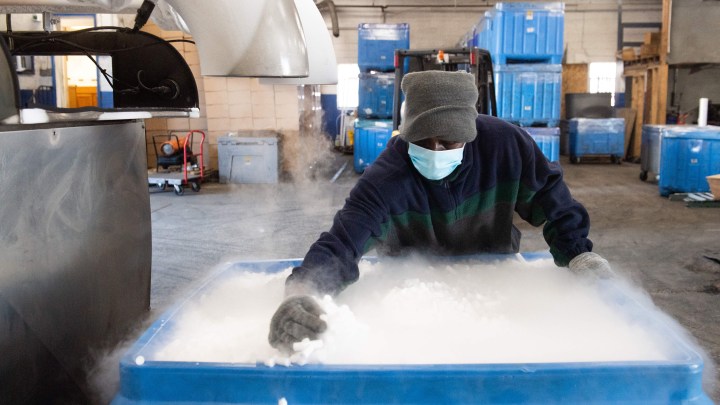 We’re getting closer to a COVID-19 vaccine moving onto the market. The Food and Drug Administration is expected to issue Pfizer vaccine authorization Friday evening. And as details get ironed out — who will get it first and how and where — one thing is certain: The vaccine has to be kept in extreme cold at minus 94 degrees. And keeping it that cold requires dry ice.

Where does that dry ice comes from? Is there enough of it to go around? And how much is it going to cost?

Just about every day, Reggie Wright, a sales manager for Roberts Gas in the Washington, D.C., area gets calls from his anxious clients — food packagers, industrial cleaners, hospitals and labs that ship specimens. They want to know: “Do we think there’ll be a shortage, do we think we’ll have any problems supplying the quantities that they are guessing they may need?” he said.

That’s because demand for dry ice is about to spike, and a whole bunch of industries are worried.

She said manufacturers use 350,000 pounds of dry ice a week to make cheese cultures. So whatever it costs, they’re going to need to buy it.

Prices started climbing in the spring because of the pandemic. Sam Rushing, president of Advanced Cryogenics, has been consulting to the industry for more than three decades. The new shutdowns “could precipitate more shortages,” he said, and higher costs.

Terry Esper, a supply chain expert at Ohio State University, said the prospect of scarcity could be an opportunity for innovation.

“We’re going to start exploring additional ways of maintaining temperatures while in transit that require solutions other than dry ice,” he said.

But he said in the meantime, while the vaccine gets priority, smaller businesses and nonessential industries may end up losing out.