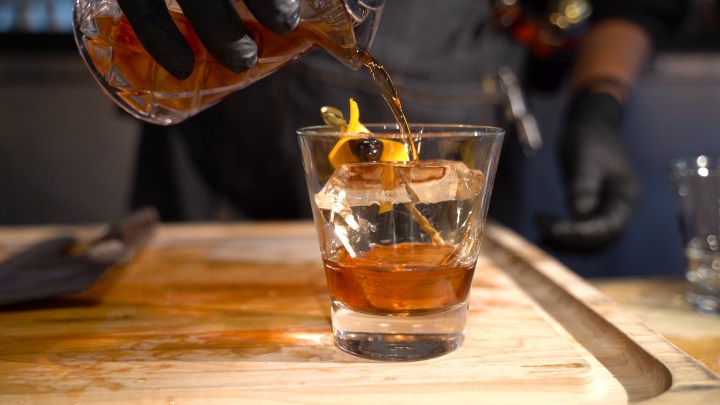 Back in the day, if you ordered a Harvey Wallbanger or a Long Island iced tea, nobody cared about how the ice cubes looked.

Now that block of solid H2O, enjoyed in drinks by Americans since the early 19th century, is getting an upgrade in many cocktail bars.

Cocktail author Jim Meehan recalls working in a bar in Wisconsin in the 1990s.

“Ice was just a utilitarian thing.” he said. “It was frozen water that was used to keep drinks cold.”

That frozen water was usually cloudy, full of impurities and air bubbles. Around the turn of the century, though, the craft cocktail renaissance began; bars threw out pre-made mixes and started using fresh juice and top-shelf spirits. And crystal clear ice started to appear in cocktails.

The first clear ice cubes were made from an ice sculpting machine, which freezes water in a way that pushes out impurities or air. Meehan was running a bar in New York at the time and he was skeptical.

“I believe the original costing on this ice was around 75c a cube, which is a pretty considerable cost per drink,” he said. The visual appeal, however, eventually won him over.

“It makes a dramatic difference in the drinks,” Meehan said. “One of the things I’ve always said to bartenders, and anyone who would really listen, is that we taste with our eyes first.”

Since then, bars have been figuring out ways to make clear ice for a lower cost. Cocktail enthusiast and writer, Camper English of the Alcademics website has run numerous experiments on making clear ice at home. He says the ice needs to be frozen “directionally.”

“In a typical ice cube, because your freezer is cold on all sides of that container, all the sides of the ice cube are freezing, and it pushes the trapped air and impurities in towards the center away from the point of freezing,” he said.

If the water is frozen in an open insulated cooler in a freezer, the top part of the water freezes first and pushes the impurities to the bottom of the block. This is the technique used by Tony Gonzales, head bartender of District, a bar in downtown Los Angeles.

Gonzales and his bartenders carve blocks of ice into cube and diamond shapes in front of customers. He’s also hired to teach fellow bartenders how to bring clear ice into bars. He said the ice cube was just as important as the ingredients in a drink.

Food writer Simran Sethi says she cares deeply about the quality and provenance of ingredients, but feels this trend is a little too much.

“I can’t quite comprehend the depth of beauty that we now require in the ice in our cocktail. It just sounds preposterous to me,” she said.

But one District customer, Michelle Frier, said she preferred large cubes, but never paid attention to their clarity. When she picked a clear ice cube out of her drink, however, she was wowed.

“Oh my God, it’s beautiful,” she exclaimed, holding it up. Frier continued: “I don’t know if I’m willing to pay $18 because I have clear ice, but it’s sparkly, it’s fun, it’s clear.”

She was so mesmerized that she took out her phone to photograph it. Jim Meehan said that if clients post images like that on social media, the bar gets a marketing boost.

“Many of the drinkers who go into these bars are taking pictures of their drink way before they put it near their mouth,” he said.

According to Meehan, clear ice delivery services are growing across the country. He doesn’t see this fad melting away any time soon.

Correction (July 23, 2019): In a previous version of this story, Tony Gonzales’ name was misspelled. The text has been updated.