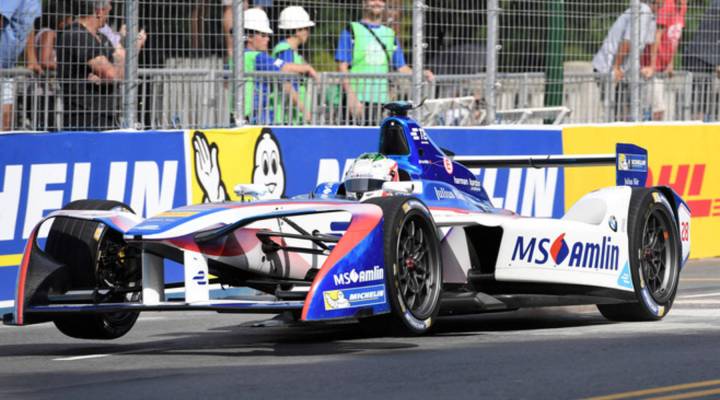 In New York City this weekend, the hot ticket is an international racing circuit for electric cars called Formula E. The series, which is wrapping up its third season, is drawing some of the world’s best race car drivers. It’s also bringing in tens of millions of dollars in investment from automakers that say the races will help them bring their electric cars to market. The series has been making the rounds, with stops in Hong Kong, Buenos Aires, Monaco and other cities.

In Brooklyn, Formula E’s racetrack looks like something out of an arcade game: a 1.2 mile loop of asphalt, surrounded by blue walls, with a grandstand and a view of downtown Manhattan and the Statue of Liberty. On a weekday afternoon, the race cars, brightly colored in blue, red, white, purple, are arriving, packed in freight containers, off a boat after a previous race in Berlin. This weekend, 20 drivers will compete here over two days, in front of an expected 40,000 spectators.

António Félix da Costa, from Portugal, is one of the drivers. “It’s amazing to be racing in this city,” he said.

Da Costa has been racing since he was eight-years-old, driving a go-kart. He’s won global championships with gas-powered cars – the Macau Grand Prix, the Formula Renault 2.0 Northern European Cup. Now he’s racing an electric car for the autosport team Andretti. “The world is going green. The world is going in this direction so the racing world obviously had to follow it,” he said.

China and Europe are imposing tougher emissions standards for cars. Cities like Paris, Madrid, and Mexico City have announced that they’ll ban diesel cars from their city centers by 2025.

As the regulations pile up, automakers are hustling to develop electric fleets. And they’re doing it, in part, through Formula E. The car companies BMW, Jaguar, Audi, and Renault are all participating in the series, building cars and sponsoring teams.

The races give them a chance to pilot their new electric technology under grueling conditions to see how it measures up. “You know, nothing pushes innovation and development better than competition,” said Justin Goduto, an executive for Audi.

Goduto says racing has always played a big role in Audi’s R&D process. The difference now: Audi, which has a fully-electric SUV in the works, sees electric cars as the future. So it’s shifting investment from gas-powered racing circuits to Formula E. “What series make sense for us to best learn, understand, develop, you know, test and implement?” asks Goduto. “I think Formula E is the right space for us.”

Jaguar, which will launch its own fully electric car next year, has devoted its entire global motorsports budget to the racing series. “From a product perspective, electric vehicles are an incredibly important part of our future,” said James Barclay, the team’s director.

Thing is, that future is still a while away.

“The electric vehicle market gets a lot of publicity but at the moment, it’s very tiny,” said Michelle Krebs, an analyst at Autotrader. She said in the first half of this year, fewer than one percent of new cars sold in the U.S. were electric.

And that’s another reason car companies are joining Formula E – to expand the market for electric cars. “There’s this idea that they aren’t very fun, they are slow. And so a racing series can bust some myths about electric vehicles,” Krebs said.

And because Formula E holds its races in city centers, it gives the automakers a chance to show off their green credentials to young, sustainability-minded urbanites. The same people who’d be likely to buy those electric cars when they do come to market.