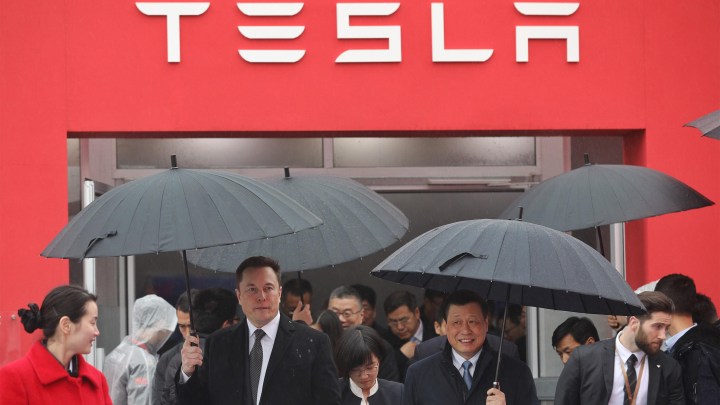 COPY
Elon Musk walks with Shanghai Mayor Ying Yong during the groundbreaking ceremony for a Tesla factory in the city in January. STR/AFP via Getty Images

Elon Musk walks with Shanghai Mayor Ying Yong during the groundbreaking ceremony for a Tesla factory in the city in January. STR/AFP via Getty Images
Listen Now

Tesla is set to deliver the first cars built at its new factory in China on Monday. The very first vehicles will go to employees.

Tesla only started construction of what it calls Gigafactory 3 in January of this year. The speed at which it got it up and running is perhaps testimony to how important car sales in China are, not only to Tesla, but to all automakers.

A car fan visiting Shanghai for the first time is likely to be struck by how many luxury cars there are on the roads.

“China’s luxury car market is twice the size of the U.S. and getting bigger every year,” said Michael Dunne, CEO of ZoZo Go, an advisory group on Asian car markets, and author of “American Wheels, Chinese Roads.”

To tap that market without incurring import tariffs that nearly double the price of its cars, Tesla had to build a local factory. It is the first fully foreign-owned car plant, an important step for China, where authorities are looking to ease restrictions on foreign cars.

“Prevously, if you built a car plant in China, you had to have a joint venture partner in China,” said Sam Fiorani, vice president of global vehicle forecasting at AutoForecast Solutions.

There’s no guarantee other automakers will be able to follow Tesla’s path to increased Chinese sales. Its cars check both the EV and the luxury boxes. Most other American and European vehicles sold in China only hit the luxury mark.

But, as Dunne said, with over 90% of all cars sold in China being built there, many foreign vehicle manufacturers will be looking at Tesla’s factory as a model.