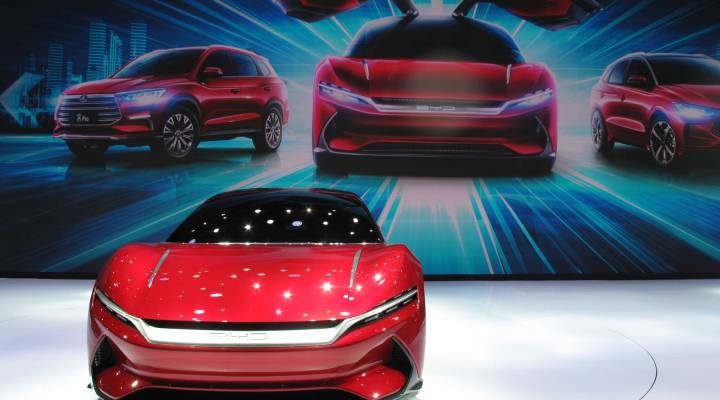 COPY
Chinese automaker BYD, a firm backed by Warren Buffet, unveiled an electric sports car at the Shanghai auto show. It’s not available for sale yet but many live streamers and car bloggers were surprised that this sleek design came from a Chinese automaker. Charles Zhang/Marketplace

Chinese automaker BYD, a firm backed by Warren Buffet, unveiled an electric sports car at the Shanghai auto show. It’s not available for sale yet but many live streamers and car bloggers were surprised that this sleek design came from a Chinese automaker. Charles Zhang/Marketplace
Listen Now

Automakers are showcasing electric sedans and SUVs at the Shanghai auto show in the hope that these models could reverse a sales slide in the world’s largest car market. Overall car sales in China have been contracting for nine months straight because of an economic slowdown and the government’s removal of a sales tax break at the end of 2017.

While this number is high compared to the U.S. and Europe, it still accounts for less than five percent of the 28 million passenger and commercial vehicles sold in China last year. According to the China Passenger Car Association, the top 10 best sellers of electric vehicles in 2018 were all Chinese automakers.

Marketplace spoke to consumers about their feelings towards domestic brands and electric vehicles. The answers have been edited for grammar, brevity and style.

Tesla’s exhibit attracts lots of interest from spectators, but some consumers are still hesitant about making the jump to electric cars.

Why did you come to the auto show? I wanted to see some cars with new energy, such as electric, hybrid or other green cars. The hydrogen energy car from Toyota impressed me, where a three minute charge can last 600 kilometers (370 miles).

What about a Tesla? Tesla may not be a good choice for me because it’s not convenient to charge electric cars in China, still.

What are you looking for in a car? I am not really into cars much, it’s a practical item so I just need a simple model. Comfort is my main concern.

Jim Wei, 45, was an avid fan of Japanese and European cars but recently he chose an electric SUV made by Chinese start-up NIO over a Tesla.

What cars have you owned? I bought my first car at the age of 27, it was a Hyundai and it was also the first vehicle in my family. Second car I bought was a Honda SUV, and the third is a Mercedes-Benz SUV, which I am driving now. I also recently bought an electric SUV from Chinese automaker NIO. I am the sixty-ninth customer of the startup.

Why did you switch to an electric care? I think electric cars are the future. They’re environmentally friendly and they save money. I have a charging outlet at home and each charge costs only 30 yuan ($4.50). My wife works close from home, so she only needs to charge the car once every two weeks. But I can’t do that, I charge it every day.

Do you worry about running out of battery and being too far from a charging station? I think the charging infrastructure in China is getting better. NIO also has a “One Click for Power” service on its app, so it’s very convenient. [Marketplace note: “One Click for Power” allows owners to order mobile charging vans or a valet service, where a staff member picks up the car, recharges it, and returns it through the NIO app.]

Did you consider any other brands? I considered Tesla. I did a test drive of both, but the NIO car is better than Tesla in every aspect, and a big part of Tesla’s price in China is the import tax. Its sales price in the U.S. is about $89,000, but my friends in China all paid more than $150,000. Plus, the NIO ES8 has 650 horsepower. Even top sports cars only have about 670 horsepower. [Marketplace note: Tesla prices should come down once it starts manufacturing models in China. A factory in Shanghai is currently under construction.]

Did you not worry that NIO is still a relatively new brand in the industry? China is developing rapidly. Just like cell phone maker Huawei’s competition with Apple, NIO’s development may be lagging Tesla’s, but it is catching up. Before I bought the car, I downloaded the NIO app and, through that, connected with its customers to trade information. We chat daily and it feels like we’re all friends.

What else makes NIO stand out? The car has a smart robot called Nomi, and its eyes will turn to the person who is speaking. My wife, son and I talk to it like it’s part of the family. My son even re-named the robot “Little Blue.” All you have to say is, “I feel cold,” and Little Blue will say, “OK, I’ll turn up the heat.” I think the SUV is beautiful, like the headlights and design. My wife loves that the front passenger seat can recline so far back, it allows her to reach our son in the back seat. There’s a wireless cell phone charger, so there are no cables running everywhere. I love the attention to detail.

Would you buy another electric car after this experience? We already have two cars, a Mercedes-Benz and the electric SUV from NIO. But my wife and I fight over the NIO. So, I’ve just ordered another NIO electric SUV.

Song Chenghui blogs about cars and has 97,000 followers on his Weibo social media platform.

Song Chenghui, 37, who blogs about cars from eastern Anhui province.

What car do you drive? I have an SUV from Chinese automaker Geely.

Driving a foreign-branded car is still considered a status symbol in many parts of China. Do you care whether the car brand is domestic or foreign? I do not pay attention to that. Chinese brands have made big progress, especially the design inside the car. There are so many choices now for Chinese consumers. Cars are getting cheaper and there are more good quality cars among the Chinese brands.

What do you make of American automakers? American cars are on the decline in the China market because appearance and interior design don’t fit Chinese customers’ taste. Chinese consumers care mostly about the appearance and design. Cheap but ugly cars are not favored by consumers. Second, more people care about the quality of the car.

Have you considered electric models? No. Of course electric cars, like Tesla’s Model 3, will still be favored by the urban elite. The car fits their status and their concern for environmental protection. Chinese automaker NIO is trying to compete with Tesla, but they still can’t quite reach that level. Most electric cars sold in China are lower-end products. Electric vehicles also have a short mileage, it’s inconvenient to charge them. So electric cars still have a low acceptance level in China, but there are those who will choose electric cars because the government will give them an automatic license plate.

[Marketplace note: In populous cities like Shanghai, Beijing, Guangzhou and Shenzhen, license plates are restricted and can only be bought through auctions or lottery systems. However, to boost electric car sales, the government not only subsidizes some of the cost, but also issues the owner a license right away.]