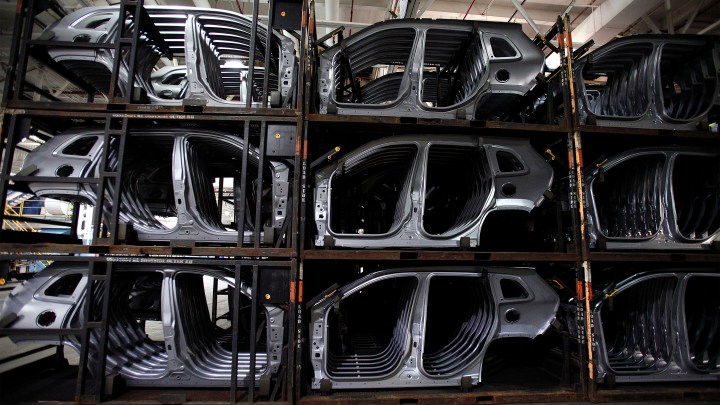 From North America, to Europe, to China, consumer demand for autos is soft. Global trade tensions persist and profit margins are razor-thin.

So megamergers like that being pursued by Fiat Chrysler and the PSA Group make sense, according to equity analyst Garrett Nelson at CFRA.

“Automakers are really looking for a way to increase their scale, to share the enormous costs associated with electric and autonomous vehicles,” Nelson said.

Carmakers now have to make massive investments in research and development and engineers, said Carla Bailo, president of the Center for Automotive Research, to produce “an internal combustion engine, many times a hybrid. And now many customers are demanding a pure electric.”

Another big cost lies in the development of the vehicle-of-the-future’s brain, said Ned Hill, a professor of economic development at Ohio State University’s Manufacturing Institute.

“That’s the software business, autonomous driving systems,” Hill said. “There’s no vehicle brand that wants to give all that money to Google or Apple. They want to keep that value added to themselves.”

In the future, a lot of people may not even buy cars. The industry is moving toward “usership” over “ownership,” said Bailo, with fleets of electric and autonomous vehicles shared or leased, charging or in use by multiple drivers as many hours as possible per day, perhaps turned in to the automaker for recycling or upgrading every few years.

“I think nobody knows right now really if they’re going to be profitable with these new business models,” said Bailo. “We certainly haven’t seen many of the startups be profitable yet.”

There is at least one potential bright spot with this shift to non-fossil fuel-powered combustion engines and software-driven vehicles, said auto equity analyst David Whiston at Morningstar.

“I do think there is potential for better margins, at least for the firms that survive in that new paradigm,” said Whiston. “An electric vehicle has a lot fewer parts.”

In the long run, the cost of materials and labor could go down compared to what’s required to make today’s heavier, multi-component, gasoline-fueled cars, trucks and SUVs. That could, in turn, leave more money in the pockets of automakers.