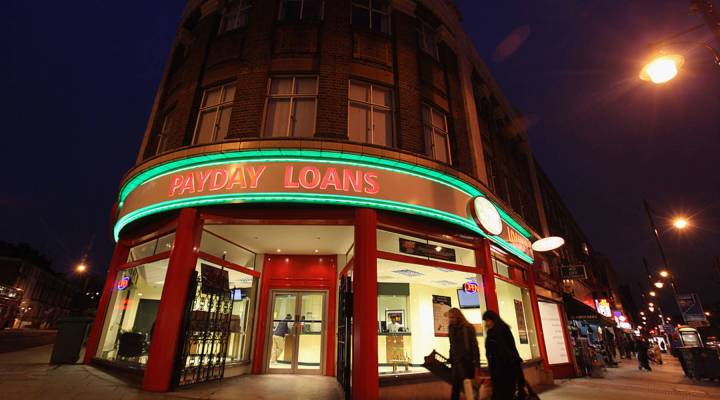 Consumer advocates often use the word “predatory” to describe payday lenders and check cashers, yet many Americans still turn to these services over traditional banks. Lisa Servon, a professor of city planning at the University of Pennsylvania, said that’s because in many cases, it’s a rational financial decision — or the only option. Her research, which included working as a check casher in the South Bronx and a payday lender in Oakland, California, aims to better understand who uses these services today and why.

Marketplace Morning Report host David Brancaccio spoke to Servon about her book, “The Unbanking of America: How the New Middle Class Survives.” Below is a transcript of their conversation.

Brancaccio: So people bring in their paychecks. Just give me a sense of the types of jobs people were doing that would come in to that location in the South Bronx?

Servon: A lot of them were, I would say, kind of service sector work, restaurants, home health aides. People whose jobs I think epitomize a lot of the new jobs in the new economy, where people are getting paid by the hour instead of salary work — often jobs that don’t come with benefits necessarily. I think that people often came in because they needed their money right away. If they deposited those checks in a bank, it would, they would take three or four days to clear. But if they brought them into the check casher, they could cash them for a small fee, give them the money right away, which they needed.

Brancaccio: That comment targets the most controversial part of this: the small or the big fee. Critics of payday lending say these places are a bad deal, and the subtext, it often suggests that it’s about financial education. Anyone who knew anything about money would steer clear, but you conclude that it’s a rational decision to turn to a payday lender like this?

Servon: That’s right. And I was more surprised or as surprised as anyone would be when I realized, and I talked to the customers that came in, I interviewed lots of them after I was done working. And one of the top reasons, particularly in the check-cashing business — and I think we need to talk about fees differently in check cashing and payday lending — but [people] told me that one of the reasons that they came to the check casher instead of a bank was because they found that the bank was too expensive, and that really surprised me. Because you’re right, what you see in the papers and all of the literature on these businesses is that they are predatory and they’re charging people too much money. In New York state where I was working, the cost at that time was 1.95 percent of the face value of a check to cash it. So, you know, you’re paying a $1.95 on $100. If you wrote a check to your landlord, let’s say, and that check cleared before the deposit that you made cleared. You’re paying $35 of overdraft fee, and those are the kinds of calculations people are making. I think when we deem them to be too expensive, these alternative financial services providers, it’s in large part because we can’t imagine — at least I couldn’t — living that close to the edge and having so little, so small of a margin in my finances.

Brancaccio: I mean, this is what the book is about, how people are surviving on what on paper might look like a middle-class income. It’s sometimes just surviving.

Servon: Sometimes people are actually making enough if you added up what they made over the course of a year, but there are spikes and dips in their income. So let’s say you’re an hourly employee, and you get 40 or 50 hours for a couple of weeks, and then it drops down to 20 and you have no warning. Or maybe like a woman I interviewed in California recently who’s worked for the court system for 36 years and was put on furlough when the state was undergoing some financial problems. Suddenly she’s got to adjust to that decrease in income immediately and she can’t. So she ends up taking out payday loans just to make ends meet and pay the rent. So these spikes and dips are more common. Income volatility has doubled over the past 30 years. And so that means that people are unprepared for those dips in their income and if an unexpected expense occurs during that time, they’re often not able to come up with the money to meet it and end up taking out a high-cost loan like a payday loan and rolling it over, thereby getting even more indebted. So income volatility plays a huge role in the financial instability so many Americans are facing today.

Brancaccio: Remind us about the distinction, there is check cashing at the place where you worked in the South Bronx, 1.95 percent of the face value the check. But there’s also payday lending, that’s a different interest rate.

Servon: Right, what you’re paying at the check casher is a fee that’s based on the face value of the check. And payday lending is illegal in New York state and several other states, which is why I went to California to do that work. In California, which is fairly typical, although these charges and fees differ from state to state, the cost of a loan was $15 per $100 borrowed. So you’re taking that $100, you’re actually paying $15, you’re getting $85. And the reason they’re called payday loans is that they’re due on the date of your next paycheck, which is either two weeks or four weeks, depending on whether you get paid monthly or twice monthly. What happens in many cases, but not all, is that when that two-week deadline comes up, you’re not able to pay the loan back. And so you end up taking it out again, another loan, and paying another $15 for that same $85. So those fees quickly accumulate, and that’s what consumer advocates and many policymakers object to, is the idea that the loan is often being used in a way different from how it was designed.

In my research, what I’ve tried to do is really lift up the situations that people find themselves in that lead them to taking out these loans and recognize that they often have no other options. And so while many people that I talked to said, “Yeah, I hope I never have to take these loans out again, I paid way more than I borrowed,” many other people said, “It was the only place I could go when, for example, my car broke down and I couldn’t get to work, and if I couldn’t get to work, I would lose my job,” or “I had to choose between putting food on the table for my children or having them go hungry, and the only way I could feed them was to take out a payday loan.” Now consumer advocates will often argue correctly that that’s not a long-term solution to the problem, but I think neither is getting rid of all of these providers of loans, because the demand is still there and the demand is there because people are not making enough money, don’t have benefits and are really at the whims of this labor market, which is not guaranteeing them stable income.

Brancaccio: So when I ask you about what’s an alternative — some of this is raising standards, raising incomes for middle-class families for sure — but at the personal finance level, is there a better way to approach this so that this is not the only option for people?

Servon: So one way to go is to look at some of the innovation that’s coming out of fin-tech. There’s a company called Ripple in San Francisco that’s using block chain technology, the bitcoin space-age kind of stuff, to figure out how to move value from one place to another immediately and without cost. What that would mean for consumers is that rather than waiting three or four days for a check to clear, the amount of that check would be available to them immediately. So you’re getting rid of a lot of overdrafting and the need for check cashing right there.

Brancaccio: All right, so innovation in technology, but what about the traditional banking system or the bigger banks? Could they do a better job?

Servon: They could absolutely do a better job. You know, the four largest banks hold half of all of our deposits right now, and they’re not necessarily doing right by consumers. They could charge less for overdraft fees, which were virtually non-existent as recently as the ’70s, and they could also change their practices to be much more consumer friendly. One of the practices that I discovered when I was writing the book is a practice that many banks engage in called “debit re-sequencing” where a consumer, for example, who has $100 in their account and writes a $500 check to their landlord, spends $50 on groceries with their debit card, and pays a $25 phone bill. If all of those charges hit their account on the same day, the bank is using software to put that $500 charge first, so that you get an immediate overdraft, then the $75 charge and then the $25 charge, resulting in three overdrafts for a consumer. Where it could put the first two charges first, which would clear, and then the third one, giving the consumer only one overdraft fee. So consumers have to really look at what their banks are doing and choose smaller community banks, credit unions or other financial services providers that are treating them with more respect.