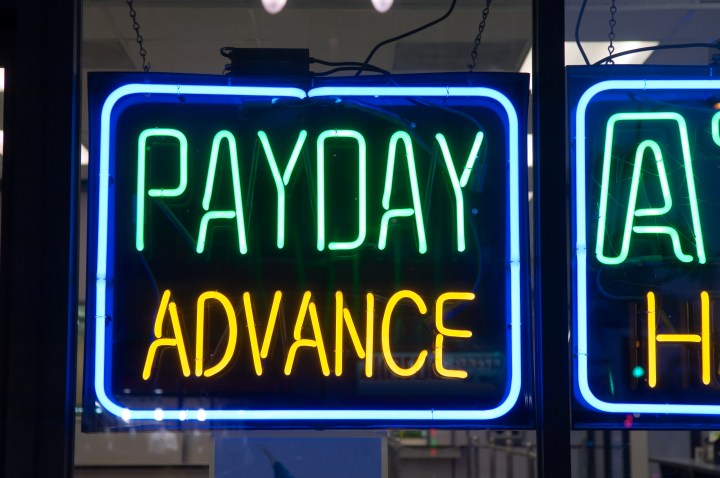 About 12 million Americans take out payday loans every year, mostly to cover necessities like rent or utilities. EHStock via Getty Images

About 12 million Americans take out payday loans every year, mostly to cover necessities like rent or utilities. EHStock via Getty Images

Payday lenders will not have to verify whether people coming in to take out short-term, high-interest loans are likely to be able to pay them back, the Consumer Financial Protection Bureau said this week.

The new rule reverses one written under the Obama administration that would have required lenders to look at someone’s income and other monthly payments — like rent, child support or student debt — before giving them a loan. It was intended to protect borrowers from getting trapped in a cycle of debt. The payday lending industry lobbied hard against those regulations, and under the Trump administration they never went into effect. Now, the CFPB has officially rolled them back.

About 12 million Americans take out payday loans every year, mostly to cover necessities like rent or utilities. People of color, single parents and low-income people are most likely to rely on these kinds of loans, which can have interest rates of upwards of 400%.

“Any kind of loosening of regulation during this pandemic, specifically around this COVID-19 crisis, is just really, really hard to swallow, knowing that people are struggling financially,” said Charla Rios, a researcher at the Center for Responsible Lending. “It feels like this rule has kind of opened the door for things to become even worse for a lot of consumers.”

More than 80% of people who take out a payday loan aren’t able to pay it back within two weeks, and end up having to take out another loan, according to the CFPB’s own research.

Former CFPB director Richard Cordray, who led the push to regulate payday loans, said in 2017 that the goal was to put “a stop to the payday debt traps that have plagued communities across the country.”

But the current director of the CFPB, Kathleen Kraninger, said that rolling back the regulations would “ensure that consumers have access to credit from a competitive marketplace.”

The payday lending industry group Community Financial Services Association of America, which lobbied against the 2017 rule, said something similar in a written statement: “The CFPB’s decision to issue a revised final rule will benefit millions of American consumers. The CFPB’s action will ensure that essential credit continues to flow to communities and consumers across the country.”

Some short-term loans “can work for a consumer, if it’s created in a way that ensures that they have the ability to repay, it doesn’t make their financial outlook worse,” said Rob Levy of the Financial Health Network.

Requiring lenders to determine whether or not a borrower will likely have the means to pay the loan back when it comes due, he said, “is a pretty bare minimum to ensure that product doesn’t simply make someone worse off than they were before.”

Now, it is up to each state to decide whether and how to regulate payday lenders. Thirty two states currently allow payday loans. The other 18 states and the District of Columbia either ban them entirely, or have capped interest rates.

“The situation that you want to avoid is people that are getting in over their head and going into this cycle in which they’re taking out a loan, not paying it back, paying the fee again for the second loan, and again and again, until they’re paying back way more than they borrowed,” said Lisa Servon, a professor at the University of Pennsylvania and author of “The Unbanking of America.”

The rule the CFPB rolled back this week “would have helped prevent that from happening with more people.”