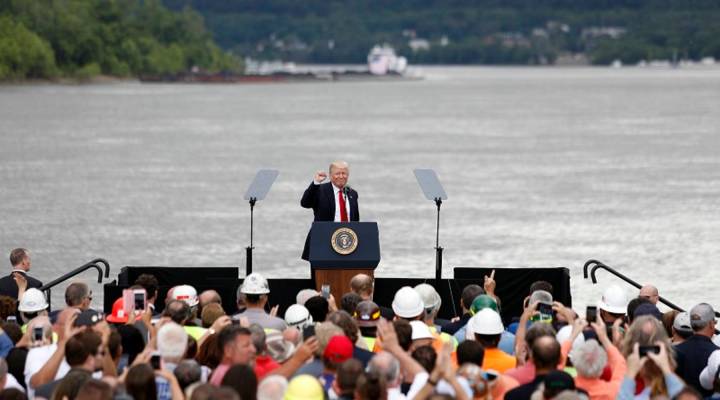 COPY
President Trump speaks about transportation and infrastructure projects at a marina on the Ohio River in Cincinnati on June 7.  Photo by Bill Pugliano/Getty Images

President Trump speaks about transportation and infrastructure projects at a marina on the Ohio River in Cincinnati on June 7.  Photo by Bill Pugliano/Getty Images
Listen Now

Though it was largely lost in the political chaos, the White House had wanted last week branded as “Infrastructure Week” to drum up support for the president’s promised trillion-dollar infrastructure plan. The plan hinges on the government spending $200 billion as a way to generate $800 billion more in private spending on infrastructure projects. Austin Golding is president of his family’s barge line business down in Vicksburg, Mississippi. He was paying close attention to what the president had to say and talked with Marketplace host Kai Ryssdal about what he heard. The following is an edited transcript of their conversation.

Kai Ryssdal: So, we talked to you right after the election. You were in “wait and see.” You were going to see what  the Trump administration was going to deliver. How are you feeling now?

Austin Golding: Well, you know, with respect to our industry obviously, having as much dialogue about infrastructure now is a nice change and it is encouraging. Slowly we’ve been getting details about how we’re actually going to fund this thing, but to have the dialogue and have kind of the spotlight pushed back toward infrastructure is a welcome change for us.

Ryssdal: What are you looking at? I mean, it’s the stuff we’ve talked about before, I imagine, right? Dredging and locks and stuff that helps you get up and down the river?

Ryssdal: Last week the president went out to Ohio, stood on a riverbank, actually pointed to a barge at one point, and said, “We’re going to fix this. We’re going to make it all better.” Were you even watching or were you out on the river somewhere in the office working?

Golding: Oh, no, I was watching. I think everybody in our industry was plugged into that speech and liked what we heard. It’s a lot of a lot of red meat for us. We gobbled it down. Now we’re trying to digest it. And I think the hard work begins now. We have to figure out where a trillion dollars is going to come from. We’re already in an active public-private partnership as we speak. So, is the funding that comes down the line, is it going to be more in that direction, or where is the source for that funding going to come from is probably my biggest question now.

Ryssdal: What about, speaking of being plugged in, the other things that are in the news: all the hearings on Capitol Hill and the Russia stuff. When you guys go to the coffee shop in downtown Vicksburg, are you talking about that?

Golding: Absolutely. I think everybody wants the ball to move down the field without as much chaos around it. But to be honest with you Kai, I’m more focused on the economic side of what’s going on right now and trying to see where I fit into this new this new strategy from an economic standpoint. So far, I like what I’ve seen. The energy around our business and the energy around mass freight in this country, as a whole, has really increased, I think. Everybody was holding their breath for literally the last two years the Obama administration to see what in the world was going to happen. At least there is a little clearer picture now then there was two years ago in my opinion.