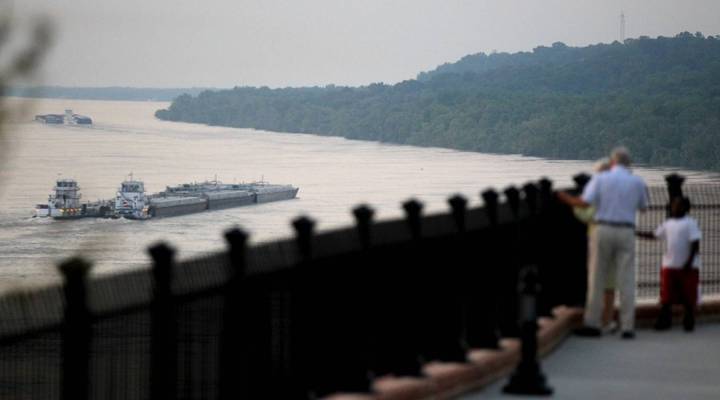 COPY
A barge moves along the flooded Mississippi River in 2011 in Natchez, Mississippi.  Photo by Mario Tama/Getty Images

A barge moves along the flooded Mississippi River in 2011 in Natchez, Mississippi.  Photo by Mario Tama/Getty Images
Listen Now

Congressional leaders, the majority Democratic, are going to the White House this week for a meeting with President Donald Trump. The topic of discussion: the current state of America’s roads, bridges and highways. This infrastructure has been greatly affected by excessive rain and snow, mostly in the western part of America’s Midwest, including dams and locks on the nation’s waterways. One of our Marketplace regulars, whose business has been affected by flooding, is Austin Golding, the president of Golding Barge Line. Marketplace host Kai Ryssdal spoke with Golding about his barge business and how things are faring. The following is an edited transcript of their conversation.

Kai Ryssdal: First of all, it feels like it’s been a while. So how’s business?

Austin Golding: Business has picked up. The economy is improving as well as our specific economies on the water. We’re seeing more cargoes, and business has improved.

Ryssdal: Let me ask you though about some of the more tangible things, like are you getting more product on your barges? Are you using bigger flotillas of barges, those kind of things?

Golding: Well, right now we’re actually dealing with high water, mostly flood conditions, up and down the Mississippi River. And high water means less cargo per barge. So we’ve actually had a little higher risk profile and a little less cargo per tow coming down the river. You know, it looks like in June we may get some relief. But here the next four or five weeks are going to be a little bit longer to go.

Ryssdal: Other thing I want to talk to you about was a trip you made out to Capitol Hill a couple of months ago, I guess. Listeners who are curious as to what you look like can just go on YouTube and search your congressional testimony. Tell me why you were up there and first of all what you thought about the congressional hearing process.

Golding: Well, it was certainly interesting to be part of this Senate hearing. We were there discussing the Jones Act, infrastructure and workforce development. And I thought all three were very productive discussions. I can tell you, Kai, I was very nervous. My wife told me that when she gave me a hug afterwards, I had sweated completely through my suit. But I came away that they genuinely are looking for answers to how to solve those problems.

Ryssdal: That’s good to hear. And I will say you look good, so sweat or not, you look good. Tell me though what the Jones Act is and why that matters to you.

Golding: So the Jones Act is a longstanding law that protects American marine interests. It basically, in its pure sense, the simplest sense, says that anything that carries American products from one American port to another has to be built in America, owned by an American citizen and crewed by Americans. So it is not only an economic protection, but it’s also a domestic national security protection law.

Ryssdal: And I guess the deal behind your testimony is that Congress is thinking about, the Trump administration wants to change the Jones Act, is that right?

Golding: Well, there’s some debate around waivers for certain ports, such as Puerto Rico and the East Coast, to be able to use internationally flagged vessels that would, in essence, be a cheaper option. The debate around these is really a debate around what’s it worth to outsource more American jobs elsewhere. It doesn’t align with the messaging out of the administration. And I think that the push is coming from people that for an increased profit margin will be willing to outsource an American industry and American jobs.

Ryssdal: Where do you — this is a little sideways — where do you get your labor force? I mean, if I want to be a barge captain for Golding Barge Line, where do I come from? Like a technical college or something?

Golding: So most of our are applicants come directly out of high school or shortly thereafter. A typical applicant is between 18 and 25 years old. After five to 10 years of experience you can make $150,000 a year. If you can get past the sacrifice and past the absence from home, that’s the type of payday that’s waiting on you.

Ryssdal: Do you find the tight labor market that we have now is a problem for you?

Golding: Well, it is a tight labor market. And if you asked my [human resources] department specifically, they’d probably nod yes, it is tight. But there’s still plenty of people out there Kai with plenty of talent ready to go to work.