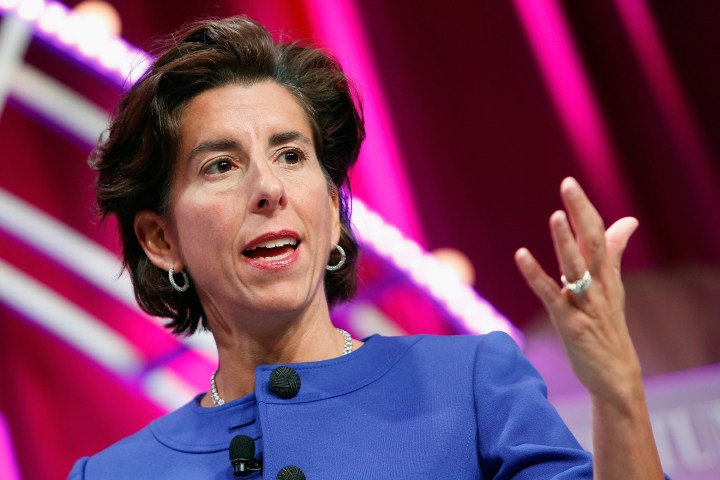 COPY
"If we're able to land the plane on these packages, it'll be a great day in America," says Commerce Secretary Gina Raimondo about the Biden administration's infrastructure plan. Paul Morigi/Getty Images for Fortune/Time Inc.

"If we're able to land the plane on these packages, it'll be a great day in America," says Commerce Secretary Gina Raimondo about the Biden administration's infrastructure plan. Paul Morigi/Getty Images for Fortune/Time Inc.
Listen Now

President Joe Biden’s wide-ranging infrastructure packages continue to move through Congress. Senate Majority leader Chuck Schumer has said the $1.2 trillion bipartisan infrastructure bill, which features money for rebuilding roads and bridges and expanding broadband internet service, will get an initial vote next week. Meanwhile, Senate Democrats have also agreed to a $3.5 trillion plan that would invest in child and elder care.

As the details of the plans are worked out, “Marketplace” host Kai Ryssdal talked with United States Secretary of Commerce Gina Raimondo about infrastructure, the care economy and supply chains. The following is an edited transcript of their conversation.

Kai Ryssdal: Let me climb right in with the news of the day, a tidbit from the Federal Reserve this morning about factory production. And I’ll just read you the first sentence from Bloomberg: “Output at U.S. factories unexpectedly declined in June against a backdrop of persistent supply shortages and soaring materials costs.” You’re in charge now. Infrastructure is your thing. What’s the plan?

Gina Raimondo: Yes. So listen, we have a serious disruption in a lot of our supply chains, which we shouldn’t be surprised by, right? Because a year ago, during COVID, we essentially shut the economy down. And now we’re trying to open it back up again. So we are doing everything we know how to do to reopen the economy and increase supply which, by the way, will also bring down prices. I know folks are talking about inflation. So we have to increase supply to bring down prices.

Ryssdal: Is that enough, do you think?

Raimondo: I think it’s a fantastic beginning. And yes, it is enough. It’s enough to stimulate production of chips in America. And oh, by the way, create a lot of jobs doing it.

Ryssdal: Let’s talk for a second about the infrastructure plans that are moving through Congress. I’m sure you saw in your packet of briefing materials that you got this morning, as I’m sure every Cabinet secretary gets, that Sen. Schumer is going to put the first package, the bipartisan package, on the floor of the Senate, I think next week. It occurs to me that, look, $4.5 trillion on both packages is a whole lot of money. Is it enough?

“A product of compromise”

Raimondo: It’s an excellent question. So first of all, that’s great news. Secondly, this — whatever comes out Wednesday and thereafter — is a product of compromise. So it is not all that the president proposed. But it’s multitrillions of dollars. It will be the biggest bipartisan infrastructure bill ever in our country’s history. So, yes, if we’re able to land the plane on these packages, it’ll be a great day in America.

Ryssdal: I want to talk about the second half of the Biden administration’s infrastructure plan. There is the hard infrastructure plan, the bipartisan plan, including, you know, roads, bridges, broadband, of concern to you, specifically, in your portfolio, but also the $3.5 trillion plan that is geared toward what has come to be called the care economy. And you have said, “Look, competitiveness is my remit here at Commerce. And if we don’t do the care economy right, we’re not going to be competitive.” So I guess my question, and it follows the question about whether or not $4.5 trillion is enough money, all in: What happens if we don’t get the care economy right?

Raimondo: That will be devastating, devastating to the millions of women who work in the care economy, many of whom work full time and are poor because they make so little. It will be devastating to the millions of working women who won’t be able to participate in the labor market because they can’t find care for their sick and elderly parents or their kids. Every other major country has paid family leave, universal public pre-K, a better system of caring for elderly loved ones in their home. We don’t. We’re behind. It makes us uncompetitive as a nation. And, as you know, as you’ve talked about, women just got crushed during COVID — dropped out of the labor force like nothing we’ve ever seen. Millions are still out of the labor force.

And I, you know, I don’t know your personal situation, Kai, but I have a 90-year-old mother. She’s wheelchair-bound, doesn’t want to be in a nursing home, shouldn’t be in a nursing home. And so we have a care team for her. And even with an awesome care team, it’s still really hard to get it all together. But my brother’s at work as a doctor, my sister’s a college professor and I’m in the Cabinet. And that’s necessary for what we can do.

Ryssdal: Let me ask you this on the way out. You’re a woman with an incredibly high-powered job that takes, probably, 26 out of every 24 hours of the day. It’s true, right? How much of your time and mental energy do you spend thinking about your mom? And then, you know, translate that down to a woman making less than minimum wage, trying to get by, you know?

Raimondo: I know. Honestly, I do not know how women do it. Every day, you spend some time thinking about it, or trying to coordinate care, or doing something. And I am super, super lucky. And, by the way, think about the women who provide the care. You know, we have to take care of them because they take care of our loved ones. And they’re, you know, they’re making like $11 an hour with no sick leave. It’s a very vulnerable system, and I hope that Congress can shore it up and get something done.