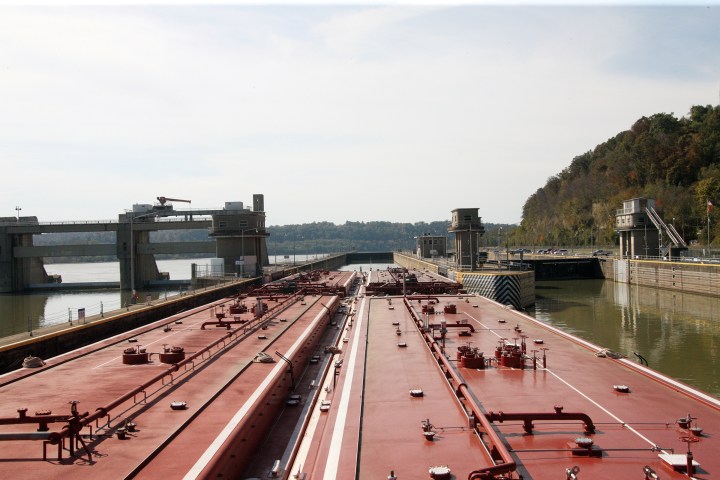 The people piloting America’s river boats are part of what keeps this economy working. By hauling petroleum, agricultural products and other goods along our inland waterways, the U.S. tugboat, towboat and barge industry contributes about $33 billion to our annual GDP, according to a study conducted by PwC.

Melody Golding is a documentarian and photographer from Vicksburg, Mississippi, with a new book out about called “Life Between the Levees: America’s Riverboat Pilots.” She also has a personal connection to the industry, something she calls “a river family.” Her son Austin, who helps run Golding Barge Line, the family’s barge company, is a regular guest on Marketplace.

Melody spoke with Marketplace host Kai Ryssdal about what life is like for America’s river pilots. The following is an edited transcript of their conversation:

Kai Ryssdal: I would like if you would start by telling me about the second date you had with the man who is now your husband.

Melody Golding: Oh, well, we caught a boat, a towboat, on the river, and rode from Vicksburg to Natchez. It was a memorable trip that set the course for the rest of my life.

Golding: The river has allure. It calls people, you know, all water calls people to its shores. And people who work on the river will tell you that. They hate her, when they’re with her, and they miss her when they’re gone.

Ryssdal: What was it that made you want to tell these stories of the folks in this book?

Ryssdal: It is a story that you tell through time. You arranged the oral histories in this book by date of birth of the person that you’re talking to. I think it goes from from, like, 1917, right up, 70-something years. And part of what’s interesting about that is the way river boating and the barge industry has changed over time. I mean, it’s busier, now, it’s more dangerous, the boats are more physical and it’s more economically vital to this country.

Golding: Yes, it is. A lot of the pilots [in the book] were broken in by early steamboat pilots from the late 1800s. And then the later pilots in the book, the younger pilots, are in the 21st-century world of technology and satellite, computer[s] and G.P.S. I mean, it’s a whole different world, now, than it was 72 years ago.

Ryssdal: You know, one of the things I talk to Austin about, every now and then when we have him on, is who comes out and who does these jobs. And it’s interesting, because you find a lot of folks in this book who got in it early and then, because it can be such a good lifestyle, economically, they stay in it, even though it means time away from their families.

Golding: That’s true. Of course, some people do love the river and they love being out there. But the money does make people stay. They can provide their family with a livelihood that they wouldn’t be able to otherwise. It’s a way of life that most land lubbers have no idea that’s out there. There’s a culture of people out there, within the heartland of America, who are who are making our country gin. They’re making it work.

Ryssdal: Do you really call us land lubbers?

Golding: Yeah. I’m kind of a land lubber, too.