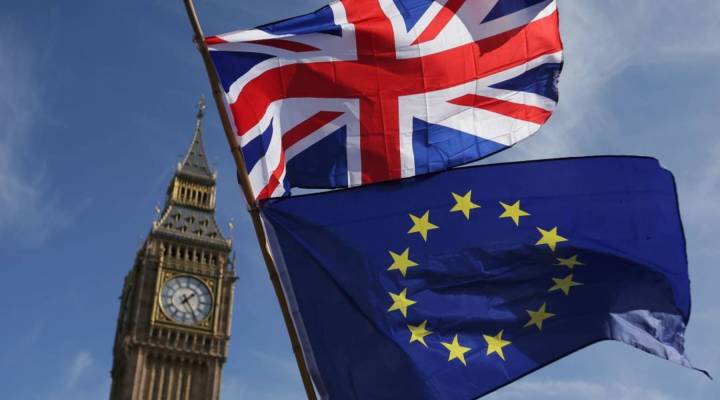 COPY
An European Union flag and a British flag fly in front of Big Ben and the Houses of Parliament. DANIEL LEAL-OLIVAS/AFP/Getty Images

An European Union flag and a British flag fly in front of Big Ben and the Houses of Parliament. DANIEL LEAL-OLIVAS/AFP/Getty Images
Listen Now

The United Kingdom heads to the polls on June 8 for a “snap” election, where British voters decide which party will control Parliament. The election was first announced by British Prime Minister Theresa May back in April in an attempt to increase the Conservative party’s majority. But with May falling out of favor recently, what was viewed as a safe bet at the time may end up backfiring on the Tories.

The Labour party, led by Jeremy Corbyn, has narrowed the gap considerably, but neither of the contending candidates fall in line with a pro-market, open-borders internationalism seen in Britain the last few decades, said Zanny Minton Beddoes, editor of The Economist. The magazine has endorsed the Liberal Democrats for its pro-market approach, which Beddoes joined us to discuss. Below is an edited transcript of their conversation.

David Brancaccio: The magazine has endorsed the Liberal Democrats, not the ruling Conservatives.

Zanny Minton Beddoes: Yep, we have. We moved away from the ruling Conservatives. We did so for several reasons. Basically, we looked at both of the main candidates in this election and decided that neither of them were really in favor of the pro-market, open-borders internationalism that has stood Britain in such good stead for the last few decades. And that is exactly where our values are. The worst of the two quite clearly is Jeremy Corbyn, the leader of the Labour Party. He wants to take Britain a hard turn to the left or, you know, back to nationalizing key industries, huge tax increases at the top. He would be appalling. But frankly, the Conservatives under Theresa May have also moved very clearly away from those liberal values, if you will. Liberal in the English context — English sense of the term that we espouse. She’s in favor of a hard Brexit; she wants to leave the single market; she wants to leave the currency union. She keeps repeating the idea that no deal is better than a bad deal, which suggests that she would like Britain to crash out, and perhaps most damagingly, she wants to slash immigration back to the tens of thousands. It’s now currently about 300,000, which would absolutely devastate the British economy if that happened very fast.

Brancaccio: Let me stop you there, because this will have a special resonance given the U.S. political context. The ruling Conservative, Theresa May, wants to significantly curtail workers moving into the country. You think that hurts the economy?

Beddoes: Absolutely, I think it hurts the economy. I think Britain’s economy has done extremely well from having the influx of talented people from around the world and from having an influx of people from the rest of the European Union. It’s both evidence of how strong the British economy was — that’s what drew people in — but it’s also part of what’s making the British economy work. You’re absolutely right that this is in some sense a fault line both here in this country and in Britain — the attitude to immigration. And there is a sense that we need to gain control over the numbers-managed immigration. I’m not against that in principle, but what I think is very dangerous is Theresa May’s adamant desire to radically cut the pace of immigration in the U.K. Because if you look at the British economy, it’s extremely dependent on immigrant labor, whether it’s in the hospitality industry, whether it’s in the National Health Service, where frankly European nurses and European doctors are essentially making that system continue. So it’s putting the ideology of dragging down immigration ahead of the British economy, and for us, we believe in an open economy, a liberal society. It’s an extremely dangerous shift.

Brancaccio: All right, so that leaves you with the Liberal Democrats. Is anybody other than your editorial board at The Economist going to vote for these people? They’re not polling all that high.

Beddoes: No, they’re not. But if you read to the end of our editorial, you would have read that we basically cast our lot with them as a down payment for the future. We hope that they will be part of the nucleus of a radical centrist movement as has happened in France. And if a year ago, you and I had this conversation and we said, “There’s this chap, Emmanuel Macron. He started a new movement called En Marche,” and you’d have laughed at me and said, “About three people will vote for it.” Well look, a year later the guy’s the president France. So our endorsement of the Lib-Dems was done in the full knowledge that they are going nowhere this year. They frankly have a terrible leader. They, as a party, are an amalgam of some soft left types and some real liberals. But for us, they are perhaps going to be the nucleus of a radical centrist movement. Since we looked at both of the other alternatives and found them both wanting, this was logically the place to be.

Brancaccio: Again, liberals in the British sense not the American sense.

Beddoes: It’s very important to say that what I mean when I say “liberal” is liberal in the 19th century British sense. Pro-market, pro-individual, freedom, pro-openness. Not the American sense.