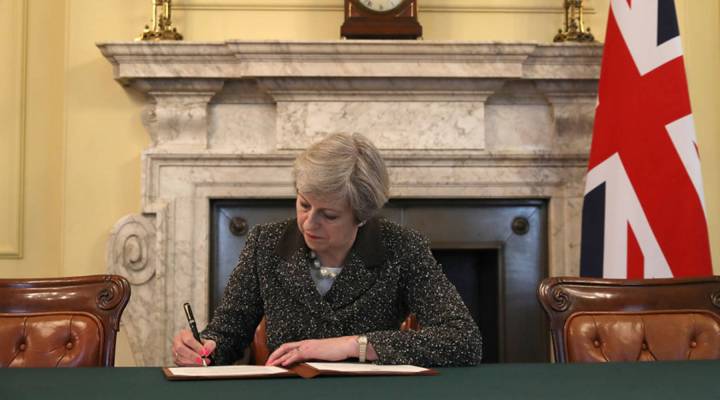 British Prime Minister Theresa May in 2017 signs the official letter to the European Council invoking Article 50 and the United Kingdom's intention to leave the EU. Christopher Furlong - WPA Pool/Getty Images

British Prime Minister Theresa May survived a no-confidence vote in Parliament on Wednesday to remain in office — but saw more of her power ebb away as she battled to keep Brexit on track after lawmakers demolished her European Union divorce deal.

May won a narrow victory, 325 votes to 306 votes, on an opposition motion seeking to topple her government and trigger a general election.

Now it’s back to Brexit, where May is caught between the rock of her own negotiating red lines and the hard place of a Parliament that wants to force a radical change of course.

After winning the vote, May said she would hold talks “in a constructive spirit” with leaders of opposition parties and other lawmakers, starting immediately, in a bid to find a way forward for Britain’s EU exit.

Legislators ripped up May’s Brexit blueprint Tuesday by rejecting the divorce agreement she has negotiated with the EU over the last two years. That it would lose was widely expected, but the scale of the rout — 432 votes to 202, the biggest defeat government defeat in British parliamentary history — was devastating for May’s leadership and her Brexit deal.

Opposition Labour Party leader Jeremy Corbyn responded with the no-confidence motion and urged the government to “do the right thing and resign.”

The government survived Wednesday’s vote with support from May’s Conservative Party and its Northern Irish ally, the Democratic Unionist Party. Many pro-Brexit Conservatives who voted against May’s deal backed her in the no-confidence vote to avoid an election that could bring a left-wing Labour government to power.

Had the government lost, Britain would have faced a snap election within weeks, just before the country is due to leave the European Union on March 29.

Political analyst Anand Menon, from the research group U.K. in a Changing Europe, said May has a remarkable ability to soldier on.

“The thing about Theresa May is that nothing seems to faze her,” he said. “She just keeps on going.”

May’s determination — or, as her foes see it, her inflexibility — might not be an asset in a situation calling for a change of course. The prime minister has until Monday to come up with a new Brexit plan.

May promised to speak to lawmakers from across the political spectrum. But she also said any new Brexit plan must “deliver on the referendum result,” which May has long interpreted to mean ending the free movement of workers to Britain from the EU and leaving the EU’s single market and customs union.