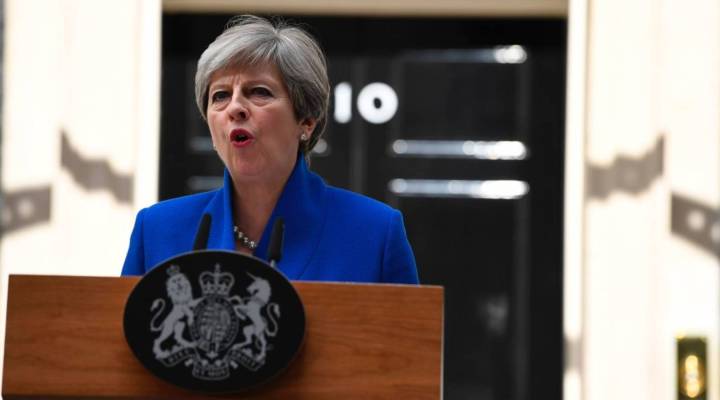 British Prime Minister Theresa May was picking up the pieces today after her Conservative Party lost its parliamentary majority in yesterday’s election. She called for the election back in April seeking a clear mandate from British voters heading into negotiations with the European Union about leaving the bloc.

Now, the plan has backfired, and May’s party is weaker in Parliament, needing the votes of a small Northern Irish party to push through its agenda, and the government will be weaker in the Brexit negotiations. Marketplace host Kai Ryssdal talked with London bureau chief Stephen Beard about the news.

Kai Ryssdal: I think we ought to start probably, with a definition of terms here, as to what happens now with Brexit. There’s the “hard Brexit” and the “soft Brexit.”  Discuss.

Stephen Beard: Both the main parties here, the conservatives under Theresa May and the Labor Party and Jeremy Corbyn, are committed to Brexit. May, however, has been promoting “hard Brexit.” She’s decided the best way to get a good deal is to say “I’m pulling out of the single market, ending the free movement of EU nationals into the U.K., and if we don’t get that and if we don’t get a free trade deal, we’ll walk away.” Labor meanwhile, has been promoting a softer approach saying, “We must under no circumstances walk away from the negotiating table.” So, this election shows there are many people in Britain that would prefer a softer Brexit. Whether they get it or not is another matter.

Ryssdal: Yeah, well help me understand then Stephen, why the electorate that voted for Brexit a year ago — and granted it was close, 52 to 48 — but a year ago, they voted for it, and now they’ve denied Theresa May the stronger mandate for that Brexit.

Beard: Well, because her main opponent, Jeremy Corbyn, very cleverly turned this election campaign into an argument about austerity, too. He said, “If we go the Theresa May route, we’re going to end up with deeper cuts in public services.” And he managed to rally the support for that reason. He is the undoubted victor in this election, no doubt about it, even though he hasn’t actually won power. And he, unsurprisingly perhaps, said Theresa May should resign.

Corbyn: “The prime minister called the election because she wanted a mandate. Well, the mandate she’s got is lost Conservative seats, lost votes, lost support and lost confidence. I would have thought that’s enough.”

Beard: There’s probably quite a few members of her own party who might actually agree with that, because this was one which she did not need to call. She had a majority in Parliament. She just wanted a bigger one.

Ryssdal: Who, though, Stephen — and yes, May’s job is at risk here — but who wants this job now?

Beard: Well, I suspect not Jeremy Corbynm because Jeremy Corbyn is sitting very pretty now on the sidelines. He’s saved his own skin because most of his own lawmakers a year ago voted to depose him. It’s a very good question. Who would want this job? Theresa May clearly wants it. She’s hanging on. Whether she can survive the summer is a big question.

Ryssdal: Cast your eyes across the English Channel for me Stephen, to Europe for a minute. These negotiations are supposed to start in 10 days. Donald Tusk, the president of the European Council, said today, look we don’t actually know when they’re going to start because of the unrest over in the U.K., but we know when they’re going end. What are they doing?

Beard: Well, on the one hand, they must be rubbing their hands with glee because they can say to any country that is considering pulling out of the European Union, “Look at the trouble it causes. Just look across the channel at Britain.” On the other hand, they’ve got enough problems on their plate already, and they do want to deal with Brexit. They want to get it started. However, what we’re facing now because of this election result is potentially a period of pretty damaging paralysis, because Theresa May hasn’t got a stonking great majority in Parliament. Many pundits here are saying May will probably face a leadership challenge pretty soon. There could even be another general election and another referendum.

Ryssdal: That’s what I was just going to ask. Is it possible we’re going to have another referendum on this thing and say, “Whoops do-over.”

Beard: Yeah, it is. It is certainly possible, and it’s possible that there could even be a another general election, too. That would mean we would have had two referendums and three general elections in less than three years. Everyone, right and left, Labor and Conservative, would see that as the least-appealing result of yesterday’s vote.