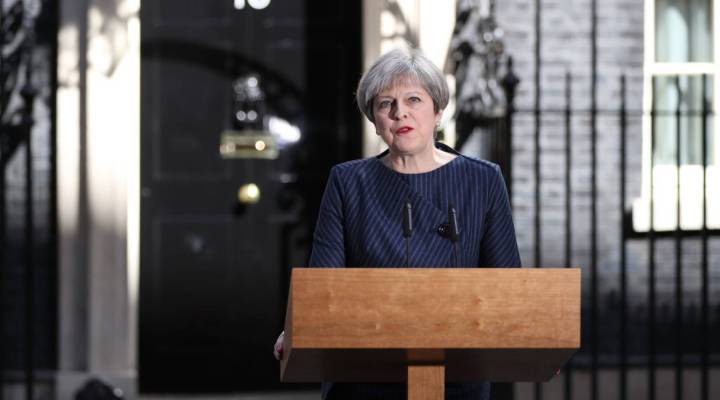 COPY
British Prime Minister Theresa May is seeking re-election ahead of talks about the terms of Brexit. Dan Kitwood/Getty Images

British Prime Minister Theresa May is seeking re-election ahead of talks about the terms of Brexit. Dan Kitwood/Getty Images
Listen Now

Britain’s “Brexit” election is now underway. Prime Minister Theresa May is seeking a fresh mandate ahead of the talks about the terms of the U.K.’s departure from the European Union, talks that are due to start in late June and are scheduled to last for up to two years.

May looks like a shoo-in for re-election. Victory would help her overcome some of the lingering domestic opposition to Brexit, but would it help her secure a better exit deal from the EU’s remaining 27 member states?

“Yes! I say a big election win is necessary to secure the strong and stable leadership the country needs to see us through Brexit and beyond,” May told a rally of party faithful this week.

Her critics suspect a more cynical  motivation. Some argue that May is attempting to exploit Britain’s heightened mood of nationalism ahead of the Brexit talks in order to crush the opposition Labour Party. Labour is bitterly divided, its leadership is widely considered ineffectual and it lags May’s Conservative party by as much as 20 points in the opinion polls. Tom Baldwin, a former Labour strategist, accuses May of brazen opportunism: seeking to lock in another term in office before the horrible truth about Brexit begins to dawn.

“She knows Brexit is going to be a disaster. She knows it’s not going to be a land of milk and honey, and so she’s cutting and running before reality bites for Brexit,” Baldwin said.

It’s already clear that Brexit is not going to be a cakewalk. In Brussels this week, one news report suggested that Britain’s bill for leaving the EU would top $100 billion. The bloc’s chief negotiator, Michel Barnier, wouldn’t confirm that figure, but he was not about to reassure Britain either.

“Some have created the illusion that Brexit can be concluded quickly and painlessly. That is not the case,” he told a news conference in Brussels.

Privately, EU officials have been much ruder about the British government. They’ve called Theresa May “deluded” and “living in a different galaxy,” because apparently she said that Britain shouldn’t pay a penny to leave the club. At first, the prime minister shrugged off the insults, but later, speaking on the steps of 10 Downing Street, her official residence in London, May angrily denounced what she said was European interference in a British election.

“The European Commission’s negotiating stance has hardened,” May said. “Threats against Britain have been issued by European politicians and officials. All of these acts have been deliberately timed to affect the result of the general election.”

Some close observers of the European Union are now pessimistic about the chances of a successful Brexit negotiation. Maintaining free trade between Britain and the EU after the U.K.’s departure could be mutually beneficial. But Yanis Varoufakis, the former Greek finance minister and veteran of many bruising encounters with EU officials and politicians, doesn’t think it’s going to happen.

“You know, the powers that be in Brussels … their worst nightmare is a mutually advantageous agreement with Britain, because it might encourage other member states to get uppity and also seek to leave the EU,” he said.

The U.K. must be seen to suffer, he said, even though it’s one of the best export markets for the rest of EU.

“They’re perfectly capable of inflicting major damage on Britain and upon themselves,” Varoufakis said.

John Springford of the Centre for European Reform is also pessimistic about the prospects for the Brexit talks.

“The two sides are so far apart, I think it’s perfectly possible that the talks could collapse. There’s a 50-50 chance that the whole thing will collapse,” Springford told Marketplace.