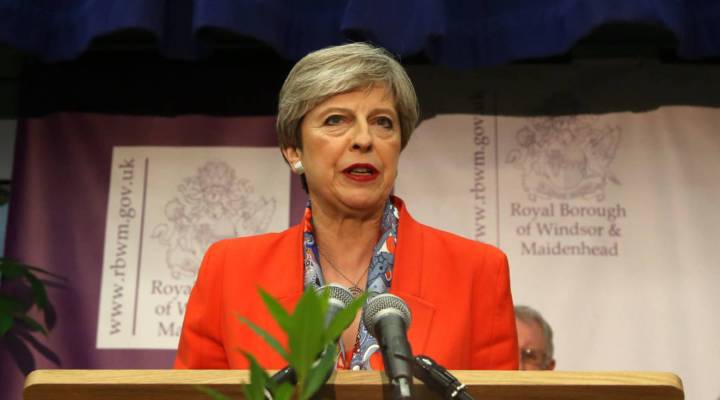 The results of the U.K. election are in, revealing a stunning setback for the ruling Conservative party. The group has now lost its overall majority in Parliament. Prime Minister Theresa May had called for this snap election back in April, hoping to get a stronger majority of Conservative lawmakers. At the time, they had 330 out of 650 seats in the House of Commons. Her goal was to gain a strong mandate during negotiations over Britain’s exit from the European Union. But now that she’s politically weaker, what’ll happen with the Brexit deal? Host David Brancaccio spoke to Stephen Beard, Marketplace’s London bureau chief, about it. Below is an edited transcript.

David Brancaccio: Conservative leader Theresa May, the prime minister — this is not an outcome she would have preferred.

Stephen Beard: No, indeed. I mean, she said vote for me, and I’ll be a strong and stable leader in the Brexit negotiations. But she’s been humiliated and massively weakened. She can only realistically govern now with the support of a party from Northern Ireland, which has a rather different approach to Brexit than her. And the Brexit talks are due to start in 10 days time. It’s a mess. It’s a pig’s breakfast!

Brancaccio: All right, but help us get a better sense of how these thorny negotiations of extricating Britain from the European Union are now going to proceed.

Beard: Theresa May wanted to drive a hard bargain with the U.K.’s European partners. She wanted, for example, an end to the automatic right of EU nationals to settle in the U.K. She wanted total control over U.K. trade while maintaining full access to the EU single market, while massively reducing or even eliminating the U.K.’s budget contribution to EU coffers. Now the EU negotiators know she hasn’t got the full backing of the British people. They’re hardly going to make any major concessions, and she’s going to have to go back to her Parliament with her divided party and try and get some obvious compromises through.

Brancaccio: The term of art here has been hard Brexit, a cleaner break. That idea is gone now, right?

Beard: Well, not entirely. I mean, this is Theresa May’s difficulty, that there is this solid core of lawmakers in her party who are very much hard Brexit-ers, and they’ve been fighting this battle for many years. So it’s not off the agenda as far as they’re concerned. But we’ll see. In this environment, it’s almost impossible to forecast what’s going to happen in the next half hour, let alone in the next few months.