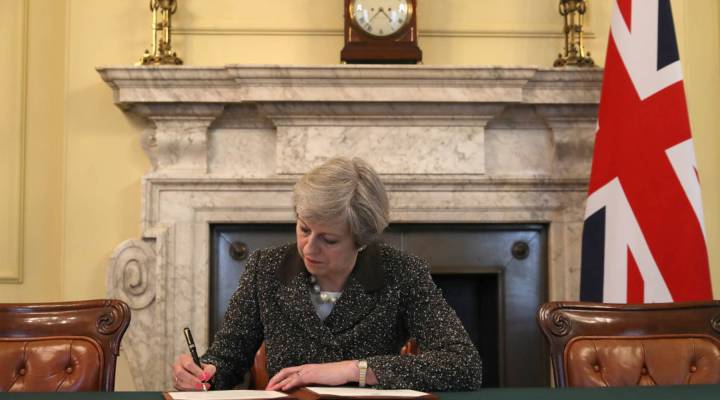 Today, British and European Union negotiators met to start talking about how they’re going to talk about Brexit — in other words, how those negotiations are going to go. But those meetings have faded into the background of another terrorist attack, the fourth in recent weeks. Marketplace host Kai Ryssdal spoke with Stephen Beard, the Marketplace correspondent based in London, to see how the Brits feel going into these negotiations. Below is an edited transcript of their conversation.

Kai Ryssdal: It has been a rough month or so over there. What’s the mood, is the question?

Stephen Beard: Pretty grim. Prime Minister May’s authority has been shattered, and that’s not an exaggeration. I mean, not just as a result of her losing her overall majority in Parliament as a result of the election, which was obviously bad enough. She’s now really been buffeted on all sides. She’s received a terrific drubbing over her response to this terrible fire in the tower block. She was very widely criticized for not going down to the site straight away, and not meeting the survivors. She seems to be a very unlucky politician right now, unable to do anything right.

Ryssdal: Is it possible that now with her on the ropes, the Europeans are going to say, “We’ve got you right where we want you, and here are your terms”?

Beard: Yes. I mean, I think the overwhelming mood in Europe is, they are as dumbfounded as the Brits by the scale of May’s descent from hero to zero. But they do seem to scent a possibility, not just of securing a softer Brexit, but possibly of a “no-Brexit,” which would be very good news for them since Britain makes a net contribution to the EU budget of some $13 billion a year. And the big net contributors like Germany, France and so on do not want to pick up the shortfall when the Brits leave. But we’ve had the new French president, Macron, the German finance minister and the European commissioner in recent days all saying the door is open. There’s still time to reconsider.

Ryssdal: Well, do you think, though, if you went out to a pub or a fish-and-chips place or something, and said, “Listen, if you had it to do over again, how would you vote on Brexit?” Do you think people’s minds have been changed?

Beard: It’s very difficult to get a sense of what people are feeling now. I mean, there has been at least one opinion poll which does suggest a change of mind by voters. Fifty-three percent said they were in favor of a second referendum on EU membership, and 69 percent said they were against leaving the Customs Union. Well, that would mean that Britain would not be able to negotiate its own trade deals, one of the main selling points of Brexit. But it’s an opinion poll, and we all distrust opinion polls, now don’t we? The polls have been all over the place.

Ryssdal: They have on everything. But it’s worth pointing out here that 53 percent in favor of a new referendum is more than the exit vote got a year ago.

Beard: This is absolutely the point. But it is one poll. And you know, the opinion polls during the election campaign in aggregate said that Theresa May would get a large overall majority. So we know what happened to that prediction.