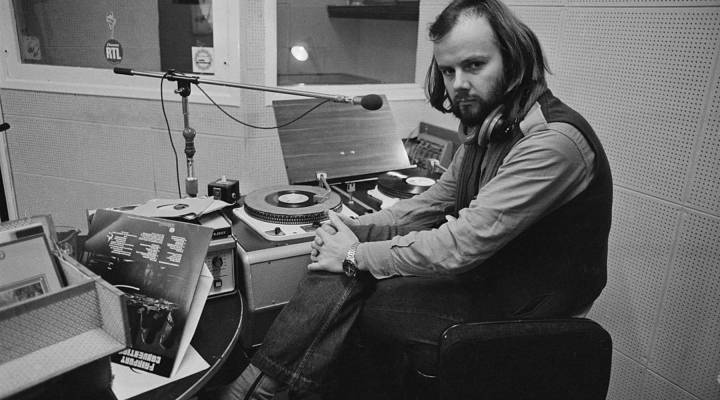 This is how we feel when we're dropping music in Make Me Smart. It's also a picture of British radio DJ John Peel in 1972. Len Trievnor/Daily Express/Hulton Archive/Getty Images
Make Me Smart With Kai and Molly

This is how we feel when we're dropping music in Make Me Smart. It's also a picture of British radio DJ John Peel in 1972. Len Trievnor/Daily Express/Hulton Archive/Getty Images

We get a lot of great emails, tweets and Facebook comments from you about Make Me Smart. Questions about the national debt, great answers to our Make Me Smart Question and lots of pictures of avocado toast. But there’s one type of question we get that I haven’t really answered yet.

“Do you guys have a place where we can find what music was used in podcasts? Was specifically looking for the piano piece played after the first Blue Apron ad in episode 16 with Chicago mayor Rahm Emanuel?” — Bentley V.

“I love Marketplace and the new podcast. Throw in some of that great Marketplace music in the new one though” — Galen C.

“Not a show suggestion, but I would love a ringtone of the outro music….”  — Michael K.

OK, so what I think I’m hearing is you want to know more about the music.

Our opening and closing theme music was composed by Ben Tolliday and Daniel Ramirez. Marketplace has great sound engineers, and each of them has a special talent up their sleeve. These two happen to know a whole lot about music. Ben just won the prestigious Churchill Fellowship, so that’s pretty cool.

The opening theme is called “The Informant,” and way back when we were creating this show, I went to them and said something like, “I would love to have something that’s cool, you know? Like you’re being invited to sit a the back table in a coffee shop with people who just love to talk about stuff.” Super specific. Somehow they managed to translate that vague producer speak into this great song.

The closing theme is called “Spiritum Liberum,” which is Latin for “free spirit.” Otherwise known as how I feel after the last note of this music plays when we tape the show.

Anyway, that’s the short story of the open and close music. Ben and Dan also composed a lot of our stings, the short bits of music you hear going into a segment like the news fix or a longer interview.

The longer stings feature different sound clips mashed together, like the one you hear when Kai and Molly talk about the Make Me Smart book club or when they read your mail. Those are usually created by the show’s producers. But I’m lucky, because an engineer named Jake Gorski has been known to sidle up to my desk and say, “I think I can smooth that out a little.” So when you hear a sting change in subtle ways from week to week? That’s because an engineer like Jake took the time to make it better.

The directors of the Marketplace radio programs make great musical choices, and you can look up which songs they use on the daily shows. On the Make Me Smart podcast, we use songs from an internet-friendly music library. (Let’s save a discussion of broadcast versus internet music rights for another day, shall we?)

So, to answer Galen C.’s question, yes, I would LOVE to use more popular music on the podcast, but instead I spend a lot of time putting terms like “Chicago blues” or “New Orleans” or “ukulele” into the search bar of our music library. And you know what? It’s a lot of fun. For example, in Episode 16, featuring Rahm Emanuel, we ended up using these tracks:

The first bridge:  “Crime City Blues” from the album “The Blues Collection,” composed by Stefan Grossman and Paul Jones.

The second bridge: “Lonesome Blues” from the album “Acoustic Blues – Paul Lenart” by various composers. (This is the one you were asking about, Bentley.)

The third bridge: “Chicago City Blues” from the album “The Blues Collection,” composed by Stefan Grossman and Paul Jones.

We’ll see if we can’t put together a more organized way to get you the title tracks each week. If that sounds good to you, let us know in the comments so we can wave them in front of the right people.

As always, thanks for listening, and if you have more music-related questions or any questions at all, drop us a line or fill out the handy little comment box on our site.