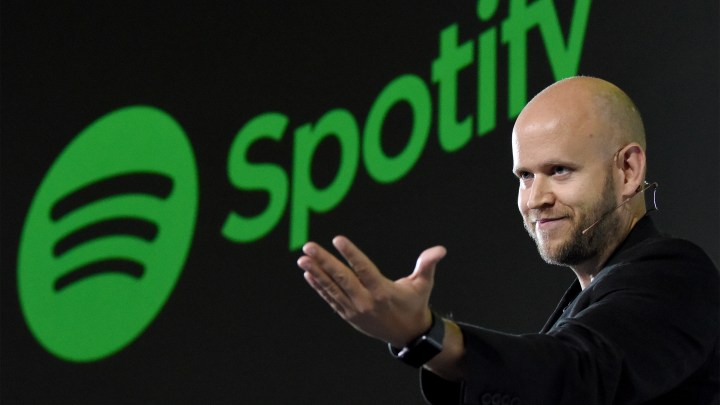 COPY
“What we really did with The Ringer, I think, is we bought the next ESPN,” says Spotify CEO Daniel Ek. Toru Yamanaka/AFP via Getty Images

“What we really did with The Ringer, I think, is we bought the next ESPN,” says Spotify CEO Daniel Ek. Toru Yamanaka/AFP via Getty Images
Listen Now

“What we really did with The Ringer, I think, is we bought the next ESPN,” Ek said.

“I don’t know, it seems so different,” said Zach Mack who used to produce podcasts for The Ringer and now works at Vox Media Podcast Network.

“The Ringer just behaves so much differently than ESPN. I don’t even think they would compare themselves to ESPN,” Mack said.

In buying the Ringer, Mack said Spotify is definitely acquiring a popular podcast brand with a built-in audience.

“They have just a bunch of big shows that do really well for them,” he said.

Spotify’s been on a spending spree over the past year. It’s already shelled out $400 million for three podcast companies. The company thinks the spending will benefit the brand in the long run.

“They think they’ll get new users if they have podcasts,” said Peter Kafka, senior correspondent at Recode.

“They think they can get more advertising dollars by creating their own advertising and putting them on podcasts. They think podcast users are less likely to ‘churn,’ that is go use another service,” he said.

He said expanding beyond music also gives Spotify the opportunity to avoid paying 60 to 70 cents on the dollar to record companies and licensing firms when users stream songs.

“It’s been real hard to make money, real money, selling music since the end of the 20th century. Spotify, for all its technical ingenuity, hasn’t changed that basic fact of the industry,” said musicologist Asher Tobin Chodos.

The terms of the acquisition weren’t immediately disclosed, but some sources estimate the deal is close to $100 million.

Spotify is a publicly traded company, so the exact numbers will come to light soon.