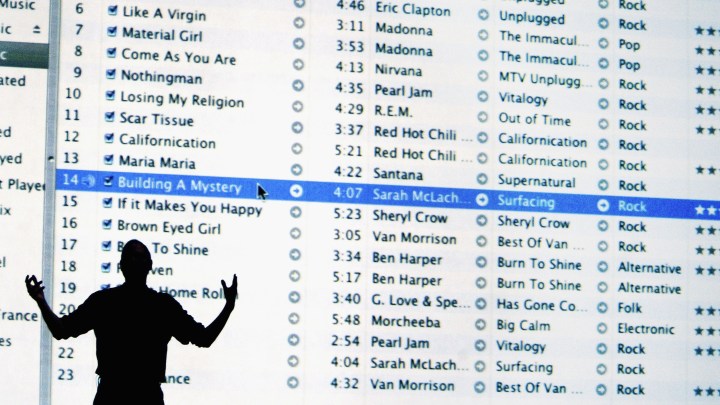 COPY
Steve Jobs stands by a projection of the iTunes website as he launches iTunes Music Store in Great Britain, Germany and France in 2004. Ian Waldie/Getty Images

Steve Jobs stands by a projection of the iTunes website as he launches iTunes Music Store in Great Britain, Germany and France in 2004. Ian Waldie/Getty Images
Listen Now

At its Worldwide Developers Conference on Monday, Apple announced that the iTunes digital media software application on its desktop and laptop computers is going away after 18 years and is being split into separate apps for music, TV and podcasts.

When iTunes launched back in 2001, Max Houck, of St. Petersburg, Florida, transferred his CDs to the Apple software. And he spent several thousand dollars in the iTunes music store. But he said iTunes got harder to use with every software update. Last year, Houck switched to Spotify, a streaming subscription service.

Michael Smith, a professor at Carnegie Mellon University, said over time, iTunes became “this ugly bloatware piece of software as Apple tried to add new things into it to make it, you know, not just music, but also movies and television shows and books, and it just became a mess.”

New York University business professor Scott Galloway said its important to remember that when iTunes launched, digital music piracy was a huge problem. That, he said, “gave iTunes an opening and the motivation for the music industry to enter into what was a bit of a ‘Sophie’s Choice,’ and that was to either let the music continue to be stolen or let Apple come in and disrupt the industry” by selling individual songs for 99 cents.

He said while iTunes was born of piracy, the music business has moved on … and now so will Apple’s iTunes.