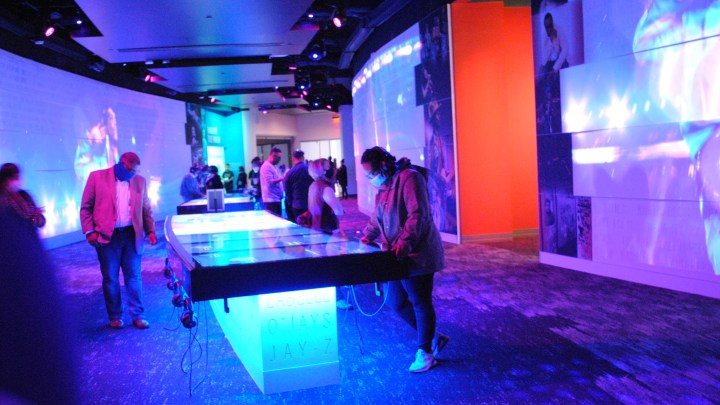 COPY
Guests enjoy interactive displays in the center of the museum, while walls feature a “takeover” performance by artist Prince. Colleen Phelps

Guests enjoy interactive displays in the center of the museum, while walls feature a “takeover” performance by artist Prince. Colleen Phelps
Listen Now

The National Museum of African American Music has operated for years as what it called a “museum without walls” — remaining active while its backers sought community support and funding for a spot in downtown Nashville, joining the Country Music Hall of Fame, Songwriters Hall of Fame and Musicians Hall of Fame. Now, after a two-decade effort, it has opened its doors to the public.

While it’s only allowed to have visitors to 50% capacity, the museum is bustling on a Saturday afternoon. The masks, temperature checks and timed entry are the most low-tech part of the visit. Every room of the building has an interactive experience tied to a specific type of music. Guests are almost immediately swept into singing in a choir led by gospel music legend Dr. Bobby Jones.

And that’s early in the walk through the museum — before guests can build a jazz improvisation, write a blues song and layer samples together. In small studios, visitors can freestyle or rap with a sample song. Then, with a swipe a smart wristband, a link to all of their creations goes to their email.

So it didn’t take long for these to make their way onto social media. Like TikTok user Joynetz3, who raps along with Nicki Minaj in an onsite recording studio.

Opening the museum has been a journey for the city. Its founders crafted a vision for the institution in 1998, and a site was first designated in 2002. But fundraising slowed things down. CEO H. Beecher Hicks pointed out that the vision narrowed.

“The original name for the museum was The Museum of African American Music, Art, and Culture,” he said.

Hicks said just focusing on music made the museum a better fit for Nashville’s brand of Music City, making it more likely to draw tourists who are already here. The original site was abandoned due to lack of funds, but eventually, with some pressure from city hall, the $60 million venue was built on Nashville’s former convention center site.

As design and construction began, the institution started to offer offsite community programming at schools and for corporate groups. In 2020, this moved online due to COVID-19. As a result, the museum has archived interviews with luminaries like jazz icon Dee Dee Bridgewater and the late Supremes member Mary Wilson.

An educational series, called “From Nothing to Something,” documents how despite limited resources, Black musicians found ways to use the materials that were available. As spoon virtuoso Lucius Talley explained, “The spoons are just like any other instrument.”

But there are some things that visitors can only experience in person, with a ticket that costs just under $25 for adults, like learning how to dance the twist, disco and popping and locking, all with an infrared instructor.

The exhibits cover 50 genres of music. Music also influenced décor and fashion, CEO Hicks pointed out, because “music is not just a genre — it’s really how we live,” he said.

The museum is open on weekends through February.