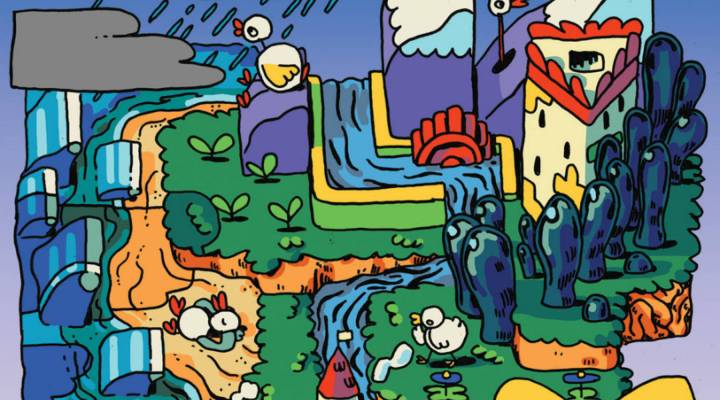 The soundtrack for Leon Chang’s “Bird World,” which includes everything from dreamy piano sequences to upbeat orchestral numbers, serves as the perfect complement for the video game — except “Bird World” isn’t actually a video game.

It’s a universe in Chang’s mind, which he specifically created a 12-track album around. And though the game doesn’t have physical copies for sale, it still has fleshed out characters, its own origin story and a quest the main character must complete.

How exactly did Chang begin with the concept?

His thinking process: “If I was gonna make a video game, who would the hero be? Where would he go? What locations? And I started from there.”

And that hero happens to be Leon himself, whose in-game character is an overweight bird modeled after the Huffin’ Puffin from Yoshi’s Island. The first piece he wrote for the album was “green tea forest.”

“That one I like to imagine a mysterious magic forest full of green tea,” he said. “Basically all the rivers and like little creeks are just running with tea.”

Chang said that as he wrote the album, a musical theme started emerging. Like in one of the first tracks, “welcome to bird world.”

“It’s this Sousa-like march that starts off with a very bouncy theme,” he said. “And I actually repeat that theme in two other songs. One of them…was the ‘twinkle twinkle little bird’ song.”

That theme extends into the final song on the soundtrack “goodbye to birdworld.”

“But it stretches out, it makes it much more emotional. It’s sort of like the ending credits after you’ve beaten the game,” he added.

“What I drew inspiration from for that one was,  I was watching a lot of Korean dramas at the time, and they have a lot of like piano and stringed instruments,” he said. “Very sad songs in them. So I was listening to like a lot of that, and I thought, ‘OK that would be pretty cool to end the album with.’”

Chang said video game soundtracks try to evoke the feeling of a location, the sense of being at a particular place.

“So even if you don’t play video games, if you’re listening to something like “Bird World,” I want you to be able to imagine, “OK, I’m in a magical forest. I want you to really, like,  get into that location,’” he said.

You can find the “Bird World” soundtrack as a digital album here.