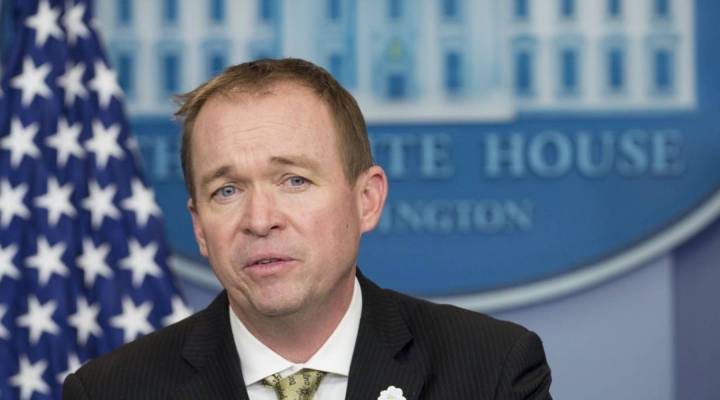 COPY
Director Mick Mulvaney of the Office of Management and Budget speaks about US President Donald Trump's budget during a daily press briefing in the Brady Press Briefing Room at the White House. SAUL LOEB/AFP/Getty Images

Director Mick Mulvaney of the Office of Management and Budget speaks about US President Donald Trump's budget during a daily press briefing in the Brady Press Briefing Room at the White House. SAUL LOEB/AFP/Getty Images
Listen Now

Office of Management and Budget Director Mick Mulvaney sat down with John Harwood of CNBC and the New York Times the other day, literally over a beer, to talk things over. Mulvaney wanted to clarify a few points about the White House’s plans for the budget.

They talked for a while, but we picked a few major things — the hiring freeze, federal debt and infrastructure — and teased ’em out a bit:

First of all, the news out of the Office of Management and Budget: the lifting of the federal hiring freeze and the state of the Federal workforce. Unsaid in that bit is the point that President Trump wants to make the federal workforce smaller — by a lot.

The memorandum lifting the freeze said agencies now have to submit draft plans to reduce their staffing by June 30.

“The emphasis should less be on slashing staff than aligning staff against the priorities that you have,” said Max Stier, head of the Partnership for Public Service, a nonprofit that focuses on making government more effective.

He said the Trump administration can only make nips and tucks with things like federal hiring freezes.

“You have to dance with Congress in order to get real change done in the government,” he said.

That’s because Congress wrote the laws governing the civil service. If you wanted to, say, abolish a federal agency, you’d have to get Capitol Hill’s buy-in, because Congress created that agency. That buy-in might not be so easy, because some lawmakers have big, job-creating federal agencies in their districts.

“Federal employees are spread across the United States,” said Paul Light, professor of public service at New York University. “More than 80 percent of them work outside of Washington.”

Also, Congress wouldn’t want huge cuts to federal workers providing services that their constituents depend on — like social security checks.

“If there are backlogs in processing various kinds of benefits, members of Congress are going to hear about it,” said Jack Pitney, professor of government at Claremont McKenna College.

Pitney said there’s a gap between the Trump administration’s plans for the federal workforce — and reality.

Trump promised to get rid of the federal debt, nearly $20 trillion, over a period of eight years, presumably assuming he would be elected for a second term. But in the interview with CNBC, Mulvaney said not so much.

Instead, Mulvaney said, the administration’s focus will be on economic growth.

Getting rid of $20 trillion of debt over four years or even eight years is not really possible. It’s hard enough to pass a balanced budget in any given year.

“No one wants to cut spending,” said Joann Weiner, who teaches economics at George Washington University. “No one wants to raise taxes, so how are you going to even get to a budget surplus, much less pay down the debt?”

So if you take eliminating the debt off the table, what does that free the Trump administration up to do?

For one thing, it might mean tax cuts, as President Trump has promised.

“They may be trying to give themselves some room for a big tax cut,” said Robert Bixby, the executive director of The Concord Coalition, a nonpartisan fiscal responsibility advocacy group. “Because certainly if you’re trying to pay off the debt, there’s no room for a tax cut.”

The Trump administration has also promised big economic growth. Backing off this plan to eliminate the debt could help with that. Rob Shapiro, of Georgetown University and the economic advisory firm Sonecon, said getting rid of the debt would require drastic spending cuts that would slow the economy.

And now, the president might be able to hold onto entitlement programs like Social Security and Medicare, which he promised to preserve.

Another big promise from the Trump Administration has long been infrastructure spending — a trillion dollars over a decade to help fix roads, bridges, dams, all sorts of things that need upgrades across the country. How we get there, though, is the question.

You’ve got one side of the aisle that hates the idea of adding to the deficit. The other is highly skeptical of Trump’s plan to bring in more public-private partnerships.

A trillion dollars for infrastructure — that sounds like a lot of money, but Brian Pallasch with the American Society of Civil Engineers said keep in mind, that’s a trillion over 10 years, and we need double that.

“The unmet investment needs are $2 trillion over the next 10 years,” Pallasch said.

The trillion mark isn’t all government spending. It depends on public-private partnerships. Pallasch said there are much-needed projects that won’t appeal much to the private sector.

“If you’re going to repair bridges or repair dams — and there’s plenty of that that needs to be done — it’s harder to find a return on investment,” Pallasch said.

Not everything is a toll road or a toll bridge.

The Trump Administration wants tax credits for infrastructure. Jesse Feinberg of management consultant Woodlawn Associates, said there’s no telling how many projects would qualify, and no telling how much demand from investors who buy such tax credits.

“These folks tend not to have the tax appetite necessary to monetize a tax credit on the scale that the Trump campaign proposed,” Feinberg said.

The White House also wants to strip funding from the federal agencies that handle infrastructure, like the Army Corps. It says a new executive office can do projects faster. Congress will have to sign off on that. 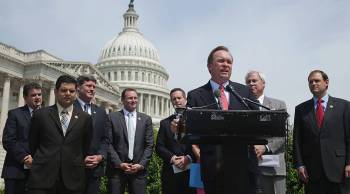